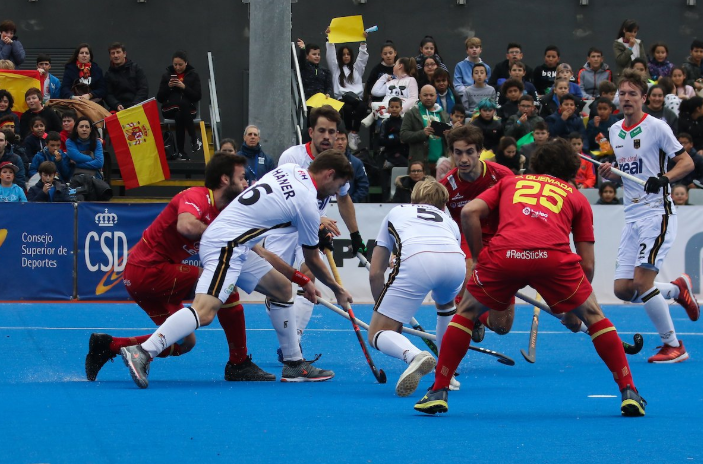 Germany took the bonus point against Spain in a thrilling encounter at the International Hockey Federation (FIH) Pro League in Valencia.

Match-week three brought together the Germans, ranked sixth in the world, and the eighth-ranked Spanish at a packed Estadio Betero.

The Germans took an early lead through a smart turn and strike from Christopher Rühr, but Spain got back on level terms in the first quarter through David Alegre.

It was Spain who then took the lead in the third quarter, when veteran Pau Quemada fired home from a penalty corner-drag flick.

But Rühr tied the scores at 2-2 with just three minutes remaining, ensuring a shoot-out for the bonus point.

Alvaro Iglesias and Josep Romeu failed to score for Spain, and that ultimately proved costly, as Rühr, Tobias Hauke, Player of the Match Niklas Wellen and Florian Fuchs all scored for Germany to seal the win 4-3.

"It is always tough to play here, we knew that from last year," Wellen said.

"We struggled in the beginning.

"First half was OK, but we knew we could play better.

"Second half was better - we played some quicker passes and I feel 2-2 was a good result."

The meeting between United States and The Netherlands scheduled for the Karen Shelton Stadium in Chapel Hill, North Carolina, had already been cancelled.

US National Teams Manager Larry Amar died this week whilst with the women's team, so that decision was made as a mark of respect.

Spain and Germany play the second match of their double-header tomorrow, while the US and The Netherlands will still play their second scheduled match on Sunday (January 26).