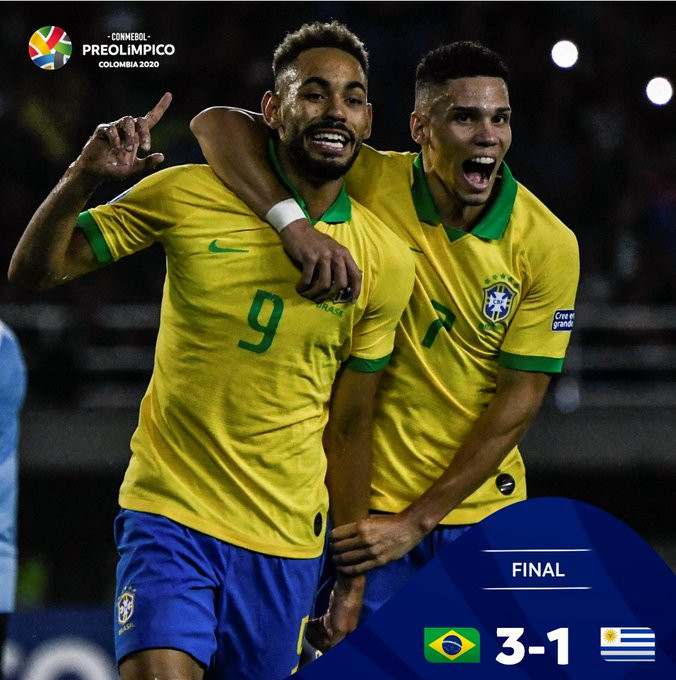 The reigning men's Olympic gold medallists saw off Uruguay 3-1, as they continued their bid to reach Tokyo 2020 at Estadio Hernán Ramírez Villegas in Pereira.

Pedrinho opened the scoring for the Brazilians on 14 minutes after latching onto a superb whipped cross from Antony and slotting home from close range.

Uruguay keeper Ignacio De Arruabarrena was then adjudged to have brought down Brazil's Matheus Cunha in the box, with the fouled man converting the penalty himself.

It was 3-0 on 77 minutes, when substitute Pepê breached the Uruguayan defence before chipping a delightful finish into the net.

Santiago Bueno headed in a late consolation for Uruguay, as the 1924 and 1928 Olympic champions moved to a record of one victory and one defeat, after their opening win over Paraguay.

Brazil, who beat Peru in their first match, won their first Olympic title in Rio thanks to Neymar's decisive penalty in a shoot-out against Germany.

It was one of the major moments of their home Games.

In today's other Group B clash, Paraguay recovered from their Uruguay defeat by beating Bolivia 2-0.

Paraguay were awarded a penalty in the 57th minute when Matias Espinoz had his shirt pulled by Henry Vaca, but Jesús Medina's spot-kick was beaten away by Ruben Cordano.

It did not matter, as Mathias Villasanti squared to Bareiro to tap home the second with two minutes left.

The tournament continues on Friday (January 24) with the third games in Group A.

Chile will meet Argentina, with both sides unbeaten, while Venezuela and Ecuador will clash while looking for their first points.

Both games are in Pereira.