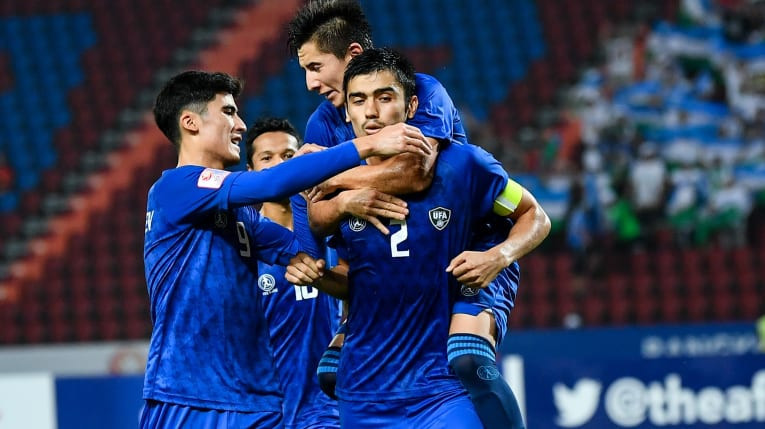 Uzbekistan, who have never qualified for the men's Olympic football tournament, kept their hopes alive of reaching Tokyo 2020 by coming behind against the United Arab Emirates in the quarter-final of the Asian Football Confederation (AFC) Under-23 Championship in Thailand today.

They were joined in the last four by South Korea, seeking to reach the Olympics for the ninth consecutive Games, who scored a dramatic late injury-time winner against Jordan to win 2-1.

Uzbekistan, the defending AFC Under-23 champions, fell behind after Zayed Abdulla Alameri put the Emiratis in front in the 13th minute at Rajamangala Stadium in Bangkok.

Jasurbek Yakshiboev and Nurillo Tukhtasinov then completed the 5-1 win in the dying minutes of the match.

The top three teams in the tournament will qualify for this year's Olympics so pressure will be on both Uzbekistan and their opponents Saudi Arabia, who themselves have not qualified for the Games since Atlanta 1996, in the semi-final at the same Stadium on Wednesday (January 22).

They will know the winner will definitely be guaranteed a place at Tokyo 2020.

Saudi Arabia had booked their semi-final place yesterday when they beat hosts Thailand 1-0.

Korea Republic are in the final 4️⃣! #AFCU23 pic.twitter.com/2BQbiLEkqN

South Korea have competed at every Olympic Games since they qualified automatically as hosts at Seoul 1988 and will be looking to keep their run going at Tokyo 2020.

But they were made to fight hard by Jordan at the Thammasat Stadium in Rangsit.

South Korea are the form team in this tournament having won all three of their group matches.

They took the lead against Jordan in the 16th minute thanks to Cho Gue-sung's header.

Jordan made South Korea pay for a series of missed chances when they equalised in the 75th minute after Yazan Al Naimat turned in the area and unleashed a terrific drive into the corner of the net.

Extra-time seemed to be certain before Lee Dong-gyeong’s free-kick in the fifth minute of time added on at the end helped them move to within touching distance of what would, remarkably, be a first-ever Continental title at this level.

Standing in their way in the semi-final in Rangsit on Wednesday will be Australia, who beat Syria 1-0 in extra-time yesterday.