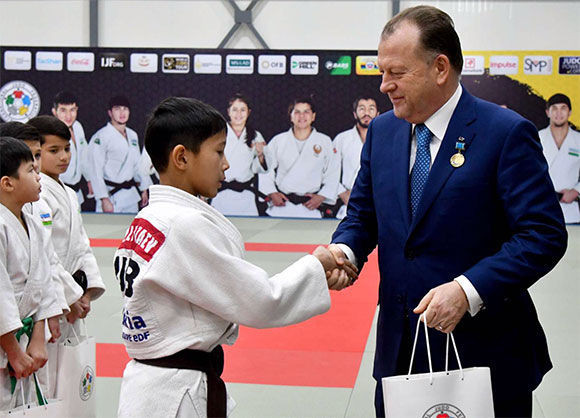 A new agreement to expand the "Judo in Schools" project has been agreed in Uzbekistan - a day after the country's capital Tashkent was awarded next year's World Championships.

The scheme, run by the International Judo Federation (IJF), is aimed at promoting physical education in schools with special emphasis on spreading a passion for judo.

The project has already been launched in 20 schools in Uzbekistan and that figure will be doubled following today's new Memorandum of Understanding (MoU) signed between four parties, including IJF President Marius Vizer.

Other signatories to the MoU included Uzbekistan's Sports and Education Ministers Dilmurod Nabiev and Sherzod Shermatov.

Completing the signatures was Azizjon Kamilov, President of the Judo Federation of Uzbekistan.

"It is important, that sport in Uzbekistan is supported by the Government and together with joint efforts of Judo Federation of Uzbekistan, IJF and Uzbek Government, your country can reach the highest position in the near future," Vizer said.

In recognition of his visit, Shermatov presented Vizer with Uzbekistan's Award of Sponsor of Education.

Tashkent was officially awarded the 2021 World Judo Championships yesterday as a replacement for Vienna.

The Austrian capital had originally been awarded the event but withdrew following the collapse of the country's Government.

Vizer today visited the newly-built Humo Arena, the venue due to host next year's World Championships.

"Uzbekistan now has a great infrastructure to promote sport across the country and the Humo Arena is a wonderful example of that," he said.