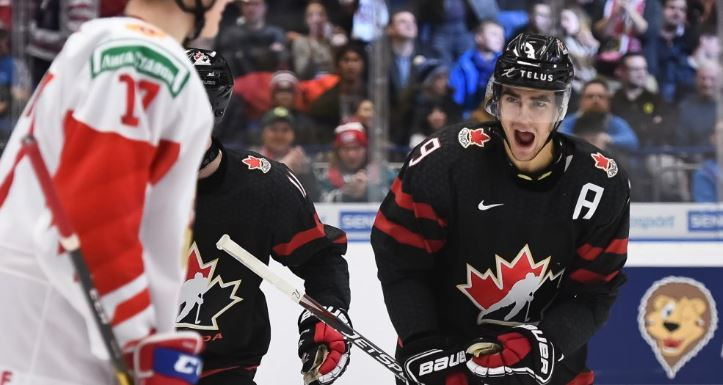 Canada claimed its 18th International Ice Hockey Federation World Junior Championship title in the Czech Republic today with a dramatic 4-3 win over Russia in front of a sell-out 8,693 crowd at the Ostravar Aréna.

The 2018 winners trailed the 2019 bronze medallists 3-1 in the third period, but found a way to achieve another victory in an annual competition first held officially in 1977.

Akil Thomas scoring their winning goal with just under four minutes remaining to earn timely revenge for their earlier 6-0 defeat by Russia in qualifying - their worst scoreline ever in this event.

Russia was seeking a fifth win, having last earned gold in 2011, although the Soviet Union amassed eight wins up until the politically transformative year of 1989.

The match remained scoreless until just before its halfway point, when Nikita Alexandrov put Russia ahead.

Canada, who had beaten defending champions Finland 5-0 in their semi-final, equalised within 22 seconds as Dylan Cozens swept in a loose puck.

But Russia went into the third period 2-1 after their captain Grigori Denisenko forced home a goal.

The Russians went 3-1 ahead through Maxim Sorkin with just 11min 14sec to go.

Within half-a-minute, however, Canada pulled a goal back after a shot by Calen Addison had deflected off Connor McMichael’s leg.

The Canadians drew level again with eight minutes and 39 seconds remaining through their captain, Barrett Hayton.

And with 3:58 remaining, Thomas. managing a backhand shot as he fell to the ice,  scored what turned out to be the decisive goal.

Earlier in the same arena in Ostrava – which jointly hosted these Championships along with Třinec -  Sweden had claimed bronze with a 3-2 win over Finland, the 2019 champions, having trailed 2-1 after the first period.

Samuel Fagemo stepped up with a goal and an assist, and Rasmus Sandin and Linus Oberg, with the second-period winner, also scored for Sweden.

"We had a great team spirit and we created a lot of chances."

Patrik Puistola and Matias Maccelli replied for the Finns.

"Really disappointing," said Puistola, whose five goals made him Finland’s top scorer in the tournament.

"Good start from us in the first period, but then Sweden did two goals in the second period and they got the lead."

In the first of the main arena’s three concluding games, Germany scored four goals in the second period against Kazakhstan en route to a 6-0 win in the final game of their best-of-three relegation series.

The result means that the Germans will go to Canada next year for the top level 2021 IIHF World Junior Championships in Edmonton and Red Deer, while the Kazakhs drop down to Division I.

Before the final day of action got underway, the IIHF President René Fasel thanked the organisers, praising the general level of fan support and the reasonable ticket prices.

He also praised host broadcaster TSN - currently covering its 30th Word Juniors - for bringing the game to fans around the world and pointed out that this event was being broadcast in a record number of 12 countries, including in all participating countries along with Belarus and Ukraine.

"We had about 3,000 fans from Canada who follow the tournament on-site wherever it takes place," Frank Gonzalez, chairman of the tournament directorate, said.

"It would be good for European fans to come over to Edmonton and Red Deer next year to see the World Juniors the Canadian way.