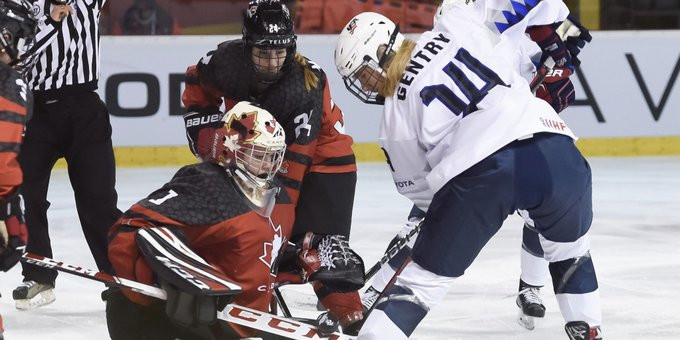 Canada's goaltender Eve Gascon pulled off 27 saves as her side beat North American rivals the United States 2-1 in their final Group A match at the International Ice Hockey Federation Under-18 Women's World Championship in Bratislava.

It took the Americans until two seconds from the end of the match at the Vlado Dzurilla - Hall 1 to beat Gascon when Lacey Eden netted.

By then it was too late as Anne Cherkowski had put Canada ahead after only 20 seconds and Marianne Picard had added a second 14min 23sec into the third period.

Defeat was harsh on the Americans goalie Skylar Vetter, who had been just as impressive as Gascon, pulling off 36 saves.

The win gives Canada eight points and top spot in Group A, with the US finishing in second place in the group with five points.

Canada and the US, who between them have won all 12 previous editions of this Championship, are now off until the semi-finals on New Year's Day on Wednesday.

"It was another great battle against Canada," said US head coach Maura Crowell.

"They got the faster start there, but I liked the way we settled in.

"I'm excited for the next one and we'll see what happens down the stretch here."

In today's other Group A match, Russia beat Finland 4-2 at Vlado Dzurilla - Hall 2 to qualify for the quarter-finals.

Kristi Shashkina scored a pair of second-period goals and added one assist as they came from 2-1 down.

Russia will now meet Sweden in tomorrow's quarter-final aftet they finished second in Group B.

They beat Switzerland 2-0 thanks to goals from Annie Silen and Thea Johansson.

The Czech Republic will take on Finland after they clinched top place in Group B with a 5-1 win over hosts and neighbours Slovakia.

The winners of that match are due to meet defending champions Canada in the semi-final on Wednesday (January 1).

The US await in the other semi-final for the winners of the Russia-Sweden tie.