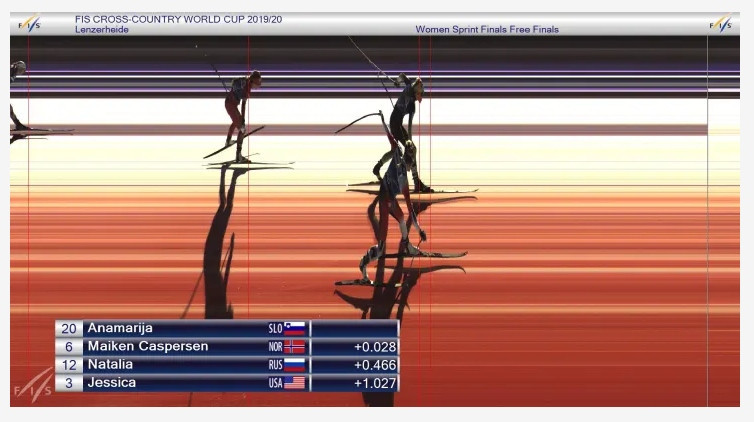 The 24-year-old, a silver medallist in the team sprint at this year's FIS Nordic World Ski Championships in Seefeld, beat Norway's Maiken Caspersen Falla by just 0.03 seconds after clocking 3min 06.02sec at the end of the 1.5 kilometres race in the Swiss resort.

Natalya Nepryaeva of Russia, sixth in yesterday's 10km mass start, crossed the line in third place, 0.47 seconds behind the winner.

Earlier, Sweden's Stina Nilsson, the outstanding performer so far this season on the FIS Cross-Country World Cup circuit, had withdrawn to return to home receive treatment on a shoulder injury that she revealed had grown increasingly painful over the past few weeks.

"She has had the feeling for a while, but received treatment and then it worked," Swedish team doctor Magnus Oscarsson said.

"It has been manageable, but today it feels too much,"

The victory of Lampič, whose father Janez represented Yugoslavia in cycling at the 1984 Olympic Games in Los Angeles, leaves her as the overall points leader.

But Nepryaeva takes over the yellow bib from yesterday's winner Therese Johaug of Norway, who did not reach the final today.

What a great show from our #fiscrosscountry Sprint experts!
Congratulations and THANK YOU for exciting competitions today ?#tourdeski

The Norwegian finished 1.20 seconds ahead of Federico Pellegrino of Italy in second and France's Richard Jouve in third.

It was Klæbo's 11th individual sprint victory in his last 11 starts.

Russia's Sergey Ustiugov, who had beaten Klæbo in the 15km mass start, was knocked out in the semi-final.

"The pace in the semi final was really high and having such a strong competition and tough fights in the heats makes it for sure difficult to stay in shape for the rest of the Tour," said Klæbo.

Focus switches next to stages three and four, due to take place in Italian resort Toblach, on Tuesday and Wednesday (December 31 and January 1).