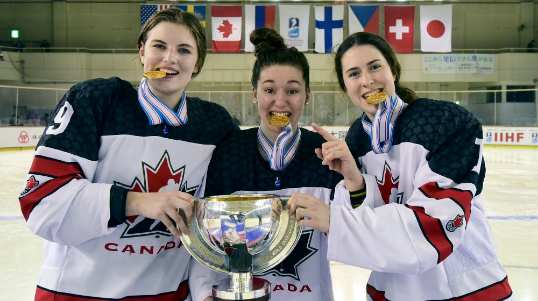 Kendall Cooper is one of five returnees from the team that beat the United States 3-2 in overtime in the last edition's gold-medal game in Obihiro.

Another returnee is forward Maddi Wheeler, who poked in her own rebound for the golden goal in the sudden-death period of the final in the Japanese city.

It broke a string of four straight triumphs for the US at the IIHF Under-18 Women's World Championships and secured Canada their fifth gold medal since the tournament begun in 2008.

Canada have been drawn into Group A with Finland, Russia and the US.

All matches are due to be played at the Ice Rink Vlado Dzurilla, in halls one and two.

The top two teams from Group A will go straight through to the semi-finals, which are due to take place on January 1 following the conclusion of round-robin games on Sunday (December 29).

The gold and bronze-medal games are scheduled to be held on January 2.

Tomorrow's action in Group A is scheduled to see Canada face Russia and the US meet Finland.

In Group B, Switzerland will go up against Czech Republic before Sweden do battle with Slovakia.