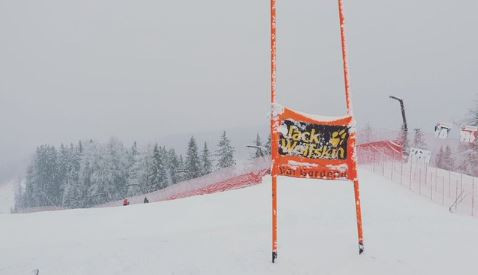 Waldner complimented the efforts of the local crew on the course, which had been able to host a reduced super-G event yesterday, despite long delays with fog and snow.

"They were out at four o’clock in the morning, starting to sweep and clean the race track," Waldner said.

"But there has been all of this wet snowfall going on all the morning and in the afternoon and the decision was pretty simple.

"The slope had started to suffer a little bit - we saw it in these last days.

"And now with this wet snow it is really tough for the race line also.

"So we decided to cancel unfortunately."

"It is always sad to cancel, but this was the only chance today," Waldner said.

"We fight yesterday for the super G, we delivered.

"So, I’m quite happy for yesterday but today Mother Nature told us – 'Stop'".

He is followed by Austria's Vincent Kriechmayr, winner of yesterday's super-G, with 116 points and Germany's Thomas Dressen with 112.

The FIS announced a new date and location for the downhill race would be "communicated soon".

The men's FIS Alpine Skiing World Cup is now scheduled to continue with a two-day event in Alta Badia in Italy tomorrow and Monday (December 23), made up of a giant slalom and parallel giant slalom.