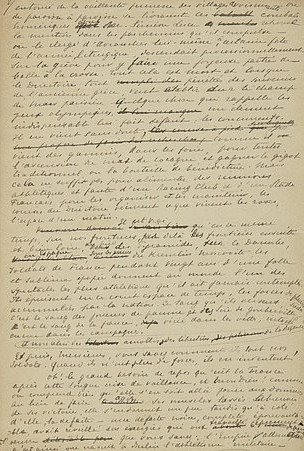 According to Sotheby's which hosted the auction, it is the highest price ever paid for an item of piece of sports memorabilia, breaking the previous record set by a Babe Ruth New York Yankees baseball jersey that sold for $5.4 million (£4.1 million/€4.8 million) earlier this year.

The 14-page document dates back to 1892 and was written by Pierre de Coubertin, founder of the International Olympic Committee (IOC).

The price skyrocketed as those present at the auction in New York participated in a lengthy 12-minute bidding war.

Sotheby's has not announced who the bidders were or who eventually won the battle for the documents.

The 5,000 word, handwritten document highlights why Coubertin wanted to bring the Ancient Greek tradition of Olympic competition back during an address he gave at the Sorbonne University in Paris two years before the formation of the IOC in 1894.

He outlined how he believed the Games could be a way to provide peaceful competition between countries.

"It is clear that the telegraph, railways, the telephone, the passionate research in science, congresses and exhibitions have done more for peace than any treaty or diplomatic convention," Coubertin wrote in the manifesto.

"Well, I hope that athletics will do even more.

"Those who have seen 30,000 people running through the rain to attend a football match will not think that I am exaggerating.

"Let us export rowers, runners and fencers; this is the free trade of the future, and the day that it is introduced into the everyday existence of old Europe, the cause of peace will receive new and powerful support," he wrote.

"That is enough to encourage me to think now about the second part of my programme.

"I hope that you will help me as you have helped me thus far and that, with you, I shall be able to continue and realize, on a basis appropriate to the conditions of modern life, this grandiose and beneficent work: the re-establishment of the Olympic Games."

The speech led to the revival of the Olympic Games with the inaugural edition in its current format being held in Athens in 1896.

The unique piece of history went missing for quite some time between the two World Wars.

Frenchman Marquis d'Amat went searching for it in the 1990s and eventually located it from a collector in Switzerland.

The sale set a personal record for the auctioneer, too, who has never hammered numbers quite this high in his 30-plus years of book and manuscript sales.

"It was a personal honor to serve as today's auctioneer, as this marks my highest price on the rostrum in more than three decades at Sotheby's," Selby Kiffer, senior specialist in Sotheby's Books and Manuscripts Department, said.