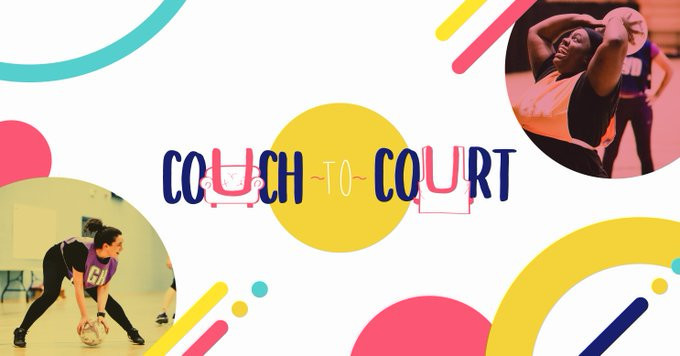 England Netball has announced details of its Couch To Court campaign, which has been introduced in a bid to get more than 4,000 women playing netball, or more netball, in the New Year.

The national governing body has introduced the concept to help battle inactivity among women and encourage even more people to step on a netball court in 2020, enjoying the social and physical benefits the sport has to offer.

The initiative comes after the recent 2018-2019 Active Lives Survey was published, which found that popularity for netball has grown, with 50,200 more people taking part from May 2018 to May 2019 compared to the previous year.

However, the findings also demonstrated that 11.2 million people are still inactive; taking part in less than 30 minutes of physical activity a week, with 313,600 fewer active women than men.

Couch To Court is said to be perfect for those that are unsure about jumping into netball straight away or want to find out more about their nearest session or club.

The campaign enables anybody to sign up to the initiative on England Netball's website, with guidance and support via email to help them overcome any nerves.

The Couch To Court web pages also provide details of all netball clubs and approved sessions across the country, many of which will be tailored for beginners who have not played for a long time, making it easy to find something local in January.

"We are so excited to be introducing this New Year campaign, Couch To Court," Fran Connolly, chief executive of England Netball, said.

"Whilst there has been a growth of 254,000 women becoming more active in the last 12 months, there are still thousands of people that need our support and encouragement to get active or back into sport, and we know that through programmes like Back to Netball and Walking Netball, we can help this."

She added: "We regularly hear that women's lives have been significantly improved thanks to netball, but we know that still a significant number worry about joining in as they think they're not fit enough, not good enough and they fear judgement.

"Couch To Court aims to remove some of those fears and guide women initially thinking of attending a netball session or joining their local club for the first time, all the way through to becoming a regular netball player.

"Back to Netball and Walking Netball sessions will be fully equipped to deliver sessions perfect for beginners as part of the Couch To Court campaign during January, which will give participants a great introduction or re-introduction to netball and ensure they thoroughly enjoy the experience.

"I know our clubs will also be very excited to welcome new participants with open arms.

"This is a very exciting initiative and I can't wait to see women all over the country benefiting from it."

As an added incentive, England Netball will enter anyone who takes part in a session or becomes a member, which means joining a registered club between December 17 and January 19, into a prize draw.

The prizes include best seats in the house at the otherwise sold-out final day of the Netball Nations Cup in London on January 26, or the Netball Superleague season opener at Arena Birmingham on February 22.

The winner will get to watch the action on a courtside couch with friends enjoying VIP hospitality, and will also get to meet some of the players and take away signed merchandise.

The Netball Nations Cup will see four of the world's best teams compete across four days and in three cities, while the Netball Superleague season opener will feature 10 teams competing under one roof.