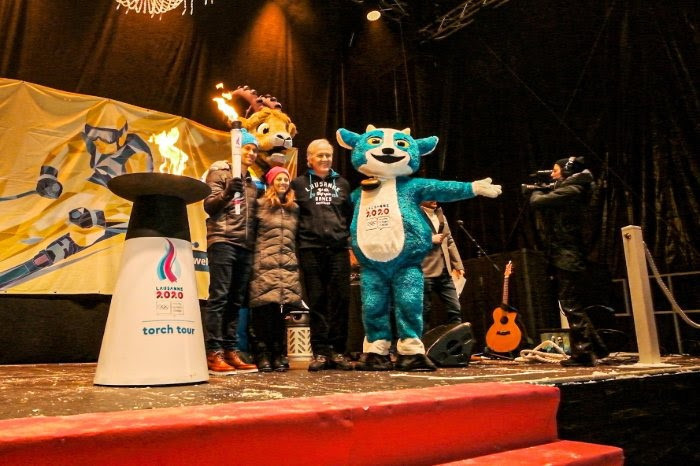 The Lausanne 2020 Youth Olympic flame has arrived in St Moritz, where it will form the centrepiece of a spectacular flame show in the centre of the town.

The arrival of the torch coincided with the International Ski Federation Alpine Skiing World Cup event held in the resort.

"What an experience to bring the Lausanne 2020 Olympic Flame for the first time to this region so emblematic of Swiss Olympic history," she said.

St Moritz was the setting for the Winter Olympic Games in both 1928 and 1948.

They were the first Games after the Second World War and although a flame burned, there was no grand relay as we see today.

Organisers are promising "a return to its roots" for winter sport as they hope to harness the heritage of the resort.

The sliding sports will take place on the famous Olympia run, while speedskating will be held on a frozen lake.

Until 1988, speed skating was always an outdoor sport at the Olympics, and this was also the case at the first Winter Youth Olympics in Innsbruck in 2012.

"Athletes will have the unique opportunity to compete on the legendary Olympia bob run and on the beautiful frozen lake of St. Moritz," Faivre said.

"It will be an unbelievably memorable experience for them.

"It will also be important for our message of promoting innovative and sustainable solutions for the future of winter sports."

The flame, lit at the Panathenaic Stadium in Athens back in September, has now visited all the cantons of Switzerland and will stop in Valais before the end of the month.

It will then move into Vaud, the home canton for Lausanne, but will also cross the border into France and visit Les Tuffes, the site for Nordic events at Lausanne 2020.