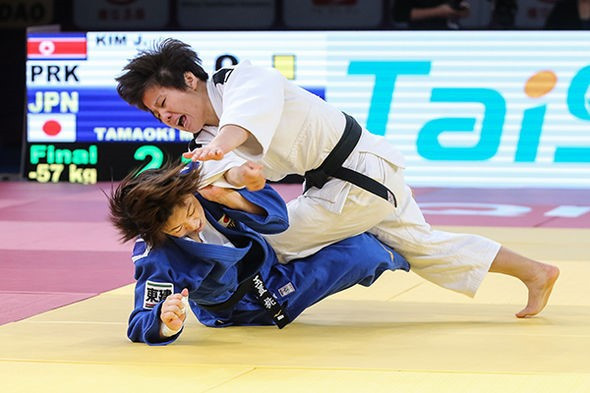 Kim Jin-a secured North Korea's first gold medal in the history of the International Judo Federation World Judo Masters, as she won the women's under-57 kilograms division in Qingdao.

Kim beat Osaka Grand Slam winner Momo Tamaoki of Japan in the final to seal an historic title for the North Korean team.

Jessica Klimkait of Canada and Olympic bronze medallist Telma Monteiro of Portugal earned the two bronze medals on offer in the category.

Former world champion Ai Shishime of Japan clinched her first Masters title, as she triumphed in the under-52kg division.

Shishime boosted her slim hopes of qualifying for next year's Olympic Games in Tokyo, overcoming world number one Amandine Buchard of France in the final.

Uzbekistan's Diyora Keldiyorova stunned Olympic bronze medallist Natalia Kuziutina of Russia in the opening bronze-medal bout, before Astride Gneto of France beat Odette Giuffrida of Italy to join her on the podium.

Victory for Nagayama put the pressure back on his team mate and three-times world champion Naohisa Takato in the race for Olympic selection in the category.

Robert Mshvidobadze of Russia and Uzbekistan's Sharafuddin Lutfillaev claimed the bronze medals in the weight class.

Lombardo proved too strong for Kherlen Ganbold of Mongolia in the final to cement his status as a rising star.

Mongolia's Baskhuu Yondonperenlei and Vazha Margvelashvili of Georgia earned bronze to end their respective campaigns on a high.

Action continues tomorrow, where a further four gold medals will be on offer.