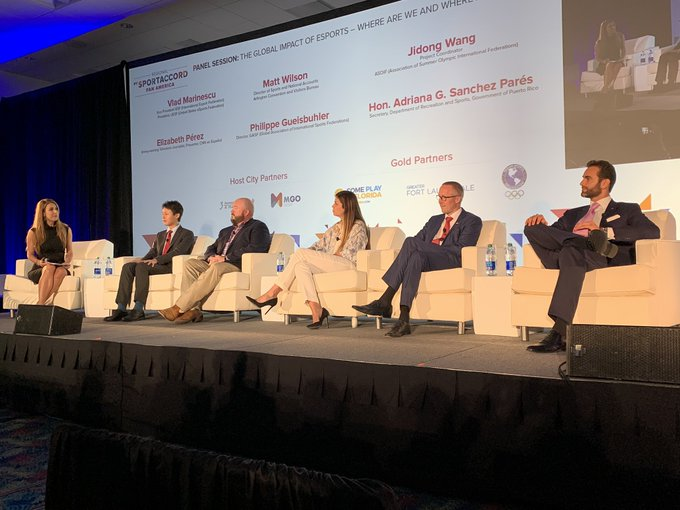 Global Association of International Sports Federations (GAISF) director Philippe Gueisbuhler has claimed sport cannot stop the rise of esports, but can help guide the industry in a positive direction.

Gueisbuhler featured as part of a panel discussion titled "Global Impact of esports – where are we and where are we going?" on the first day of Regional SportAccord Pan America here today.

The panel discussion followed as presentation by Vlad Marinescu, the vice-president of the International Esport Federation (IESF) and United States eSports Federation President.

The growth of esports was a key topic of discussion, along with its potential to collaborate with International Federations.

Gueisbuhler concluded that it was important for a balance to be established, where esports could potentially help to ensure younger people to lead a more active lifestyle.

"This train is already driving, we cannot stop esports," he said.

"It is there and will continue to grow.

"Our kids and youth are on board and all we can do is try to bring it in the right direction.

"We need to have a look at how people can use it as a balance between real sport, work and have a bit of fun, as well as making a competition out of esports.

"This is the question of balance.

"We need to educate our children, it is important for them to have fun."

The panel discussion also assessed challenges for esports, including how publishers own the rights to games.

Another concern was the potential danger of young people and professional esports players becoming addicted to games.

Marinescu revealed the IESF were paying increasing attention to this area, including educational programmes for players and advice on nutrition.

He claimed collaboration with sport could also play a role, while adding that esports could provide an avenue for players to becoming more involved in traditional sport.

"This is an activity that half of planet earth is doing," Marinescu said.

"The question today is whether we make the right structure for the future and make sure it can grow sustainably.

"Rather than to get blacklisted in a certain way and stop the activity because it is addictive or bad in some cases.

"We should not punish the people of a whole country for the actions of one.

"I believe we have a future ahead of us if we learn to work together with Governments, national and international federations.

"Collaboration is essential to create an environment which enables all people playing games to do it safely, happily and be entertained.

"The target of this should be entertainment, as well as high level competitive play that can generate revenue that we can invest back into education programmes.

"I think there is an exchange between esports and physical moving sports that is a proper combination and formula."

The Olympic Summit last week suggested that International Federations consider how to govern electronic forms of their sport and explore opportunities with gaming publishers.

This followed a report from the chair of the esports and gaming liaison group, International Cycling Union President David Lappartient.

The Summit agreed on a two-speed approach.

With regard to electronic games simulating sports, the Summit claimed it saw great potential for cooperation and incorporating them into the sports movement, with many sports simulations becoming more physical due to the advancement of virtual and augmented reality.

As such, International Federations were urged to explore esport opportunities.

The Summit also concluded that the sports movement should just focus on players and gamers rather than specific games, as this focus on individuals would promote the participation in sport and its benefits.

Jidong Wang, a project coordinator for the Association of Summer Olympic International Federations, claimed that while Federations should explore opportunities with esports, the industry could also learn from traditional sport.

"For example in governance issues, we are trying to review our governance but esports does not pay much attention in this field.

"I think for it to fufill its potential for the whole industry, there needs to be more of a focus on the ethics side of the sport.

"Whether that is athletes’ career after retirement, how to keep them mentally and physically healthy and gender equality."