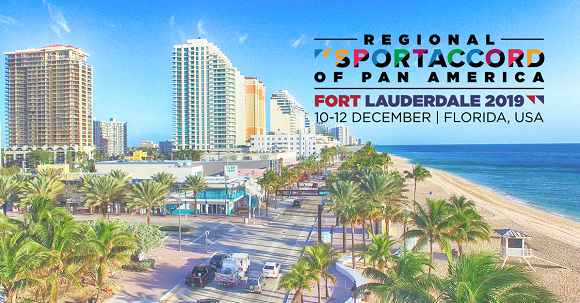 A first Regional SportAccord Pan America Convention will officially be opened here tomorrow, as a week of events take place in Fort Lauderdale.

Regional SportAccord Pan America was announced earlier this year as a part of a drive to gather event organisers, governing bodies and other influential figures in sporting politics in a localised setting.

The event has been billed as an opportunity to help International Federations to bring together stakeholders and organisations to help develop their sport in the region.

The theme of the conference is "A United Approach to the International Sport Landscape in the Americas".

A welcome reception will take place tomorrow here, before the two-day event takes place at the Broward County Convention Center.

Several topics will be familiar to SportAccord, with a keynote address from Association of Summer Olympic International Federations executive director Andrew Ryan focusing on “The Changing Landscape of the International Sports World”.

A panel discussion will follow on the topic, before the regional theme comes to the fore with Panam Sports secretary general Ivar Sisniega presenting on the “New Vision of International Sports in the Americas”.

Esports and the safeguarding of athletes will feature as two of the main topics on Wednesday (December 11), along with the use of data to transform host cities.

Gymnastics great Nadia Comăneci will be among the speakers on the final day of the event, with International Judo Federation President Marius Vizer also scheduled to speak.

Vizer will give an International Federation’s perspective on governance.

A panel discussion will focus on ensuring a successful relationship between athletes and sport, while there will be an assessment of sport’s social responsibilities.

After the Convention closes, the fourth edition of the Americas Best Practices Symposium, organised by Panam Sports and the United States Olympic and Paralympic Committee will be held.

The Symposium will take place on December 13 and 14, with sport leaders from 41 countries throughout the continent expected to be present.

The Symposium also aims to strengthen the bonds between sport bodies and Government leaders, which Panam Sports claims is critical for the future success of sport in the Americas.

It will cover high-level sport performance, sport for all and long-term athlete development, as well as supporting athletes as they transition to a career outside international competition.

The inaugural Panam Sports Gala will be held on Friday (December 14).

Nominees for the awards were announced last month by the organisation, who are seeking to honour athletes for their performances throughout 2019 and particularly at the Pan American Games in Lima.

Awards will be presented to the best male and female athletes, as well as the best men’s and women’s teams.

Next generation awards for athletes under the age of 20 will also be presented, along with the best coach.

Changemaker and Panam Sports Values awards will also be presented on the evening.