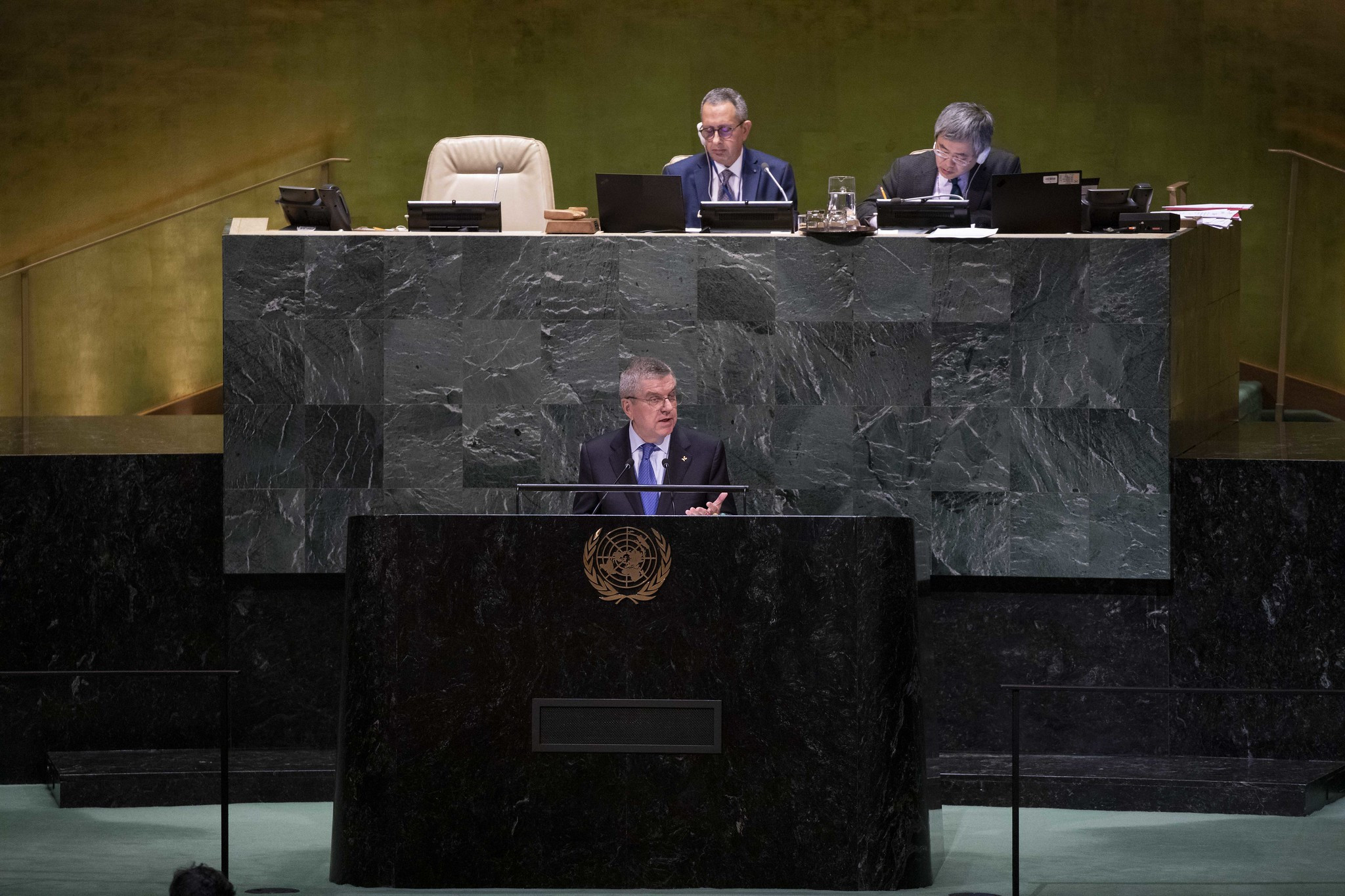 The Olympic Truce resolution for the Tokyo 2020 Games has been unanimously approved without a vote at the United Nations General Assembly in New York.

The draft resolution, calling upon UN member states to cease hostilities in order to protect the interests of athletes and sport in general, was presented by Tokyo 2020 President and former Japanese Prime Minister Yoshirō Mori.

Nearly every member state chose to co-sponsor the resolution.

In keeping with the tradition dating back to the original Olympic Games in Ancient Olympia, the resolution aims to ensure a halt to all hostilities, allowing the safe passage and participation of athletes and spectators for the Olympic and Paralympic Games at Tokyo 2020.

"It is indeed encouraging to see the wide level of support of member states for this resolution," International Olympic Committee (IOC) President Thomas Bach said during the General Assembly.

"This resolution is a powerful reminder of the shared values on which both the United Nations and the IOC are built.

"What better time than this Olympic year, 2020, to emphasise these shared values.

"With the adoption of the Olympic Truce resolution today, you are supporting the Olympic Games Tokyo 2020 as this true symbol of peace in our world.

"Today is therefore a welcome opportunity to reaffirm the commitment of the IOC to our shared values of peace, solidarity, and respect."

"These athletes then competed on an equal basis with all the other athletes in the Olympic Games Rio 2016.

"Standing here again four years later, I wish I could announce to you we do not need a Refugee Olympic Team any more, but unfortunately the reasons why we created this team continue to persist.

"In this way, we want to send a strong message of hope to all refugees and at the same time we want to raise awareness all across the world about this global refugee crisis."

"I invite you all to join hands and to celebrate our unity in all our diversity at the Olympic Games Tokyo 2020 and beyond.

"Let us demonstrate together that our shared humanity is stronger than the forces that want to divide us."

In his introductory speech, the UN press organisation reports, Mori noted the multiple threats to peace around the world and said he still hopes for a world without conflict.

"People can live together by fostering understanding," Mori said, recalling his time as Prime Minister of Japan.

The initiative for a global Olympic truce was something he described as “precious” as he pointed out that peace was the original concept for creating the Olympics.

"It must be the mission of the international community to promote the Olympics for future generations." he added.

Recalling the Tokyo Olympics of 1964, Mori said it was a major step toward recovery “from a burnt down land in just 19 years”.

"Giving courage to one another will strengthen us all," he said.

"What is marvellous about sport is its ability to help people overcome difficult challenges."

He concluded that leaders must be courageous enough to believe that agreements could replace conflict.

"Sport has the power to change the world and the future," Mori added.