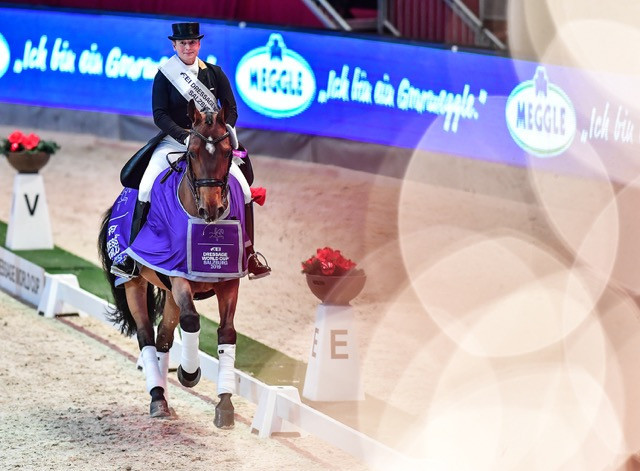 As defending champion, the 50-year-old six-times Olympic champion only has to compete twice during the qualifying season with whichever horses she intends to take to the Final in Las Vegas next April.

The Salzburg result was her second this season partnering the 13-year-old gelding Emilio.

At Lyon in October the pair relegated London 2012 and Rio 2016 individual champion Charlotte Dujardin and Mount St John Freestyle into runner-up spot, having been pipped by the British duo in the previous day’s Grand Prix.

Although Werth and Emilio kept their German counterparts Benjamin Werndl and Daily Mirror at bay in both competitions at the Austrian fixture this weekend, the winning margin was a relatively narrow one on each occasion.

"I’m very happy that Ben had such a good tournament here in Salzburg and is going so well," Werth said.

"As long as he stays like that - in second place - that’s fine by me!”

Home rider Victoria Max-Theurer, on Benaglio, took third place on 78.525 ahead of a third German, Helen Langehanenberg, on Annabelle, who scored 78.150.

Werth is now planning to give Weihegold, the mare with which she has claimed the FEI Dressage World Cup title for the last three years, her second outing of the season at Amsterdam in January.

Today’s result installed Werndl to the top of the league table ahead of Langehanenberg in second, Hans Peter Minderhoud of the Netherlands in third and French rider Morgan Barbancon into fourth place.