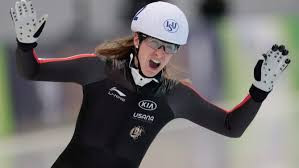 Her first gold came in the women's 1500 metre race after recorded the winning time of 1min 55.599sec at the Alau Ice Palace in the Kazakhstan capital.

Blondin then topped the podium again, this time alongside compatriots Valerie Maltais, Beatrice Lamarche and Isabelle Weidemann in the women's team pursuit.

Zhongyan Ning of China managed to hold a double Dutch challenge in the men's 1500m.

The day's competition concluded the World Cup event, with the next stop scheduled to be in the Japanese city of Nagano from Friday to Sunday (December 13 to 15).