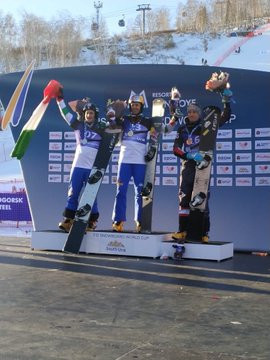 Fischnaller, 39, defeated compatriot Mirko Felicetti in the men’s big final after his opponent failed to finish following a fall.

Hofmeister dominated the women's competition and overcame Switzerland’s Ladina Jenny by 0.59 seconds in the big final.

She had earlier beaten Jenny’s fellow countrywoman Julie Zogg, the winner of yesterday’s parallel slalom, in the quarter-finals before defeating home favourite Natalia Soboleva in the last four.

Soboleva lost to Austria’s Claudia Riegler in the small final, by 0.11 seconds.

Parallel action on the FIS Alpine Snowboard World Cup tour is due to continue next weekend.

Italian town Cortina d'Ampezzo, set to host the 2026 Winter Olympic and Paralympic Games with Milan, is scheduled to play host to a parallel giant slalom event on Saturday (December 14).