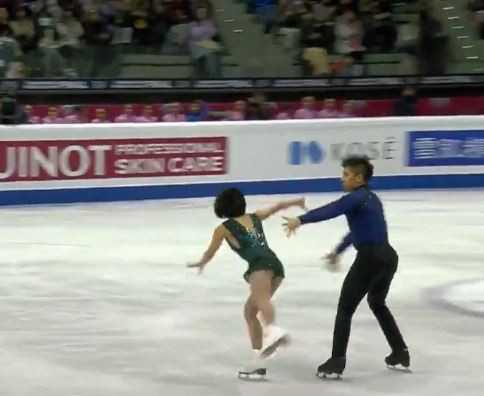 They finished with a score of 211.69 points, ahead of compatriots Cheng Peng and Yang Jin, who scored 204.27, and Russia’s Anastasia Mishina and Aleksandr Galliamov,who scored 203.13, at the Torino Palavela.

Sui and Han had impressed in the pairs short programme, scoring 77.50 points to top the leaderboard.

Following them were Russian pair Aleksandra Boikova and Dmitrii Kozlovskii on 76.65 points, while their compatriots Daria Pavliuchenko and Denis Khodykin had finished third on 75.16.

The women's and ice dance competitions also got underway tonight.

🏆 Wenjing Sui / Cong Han (CHN) 🇨🇳 add yet another title to their arsenal, the elusive title of Grand Prix Champions!

Bradie Tennell of the United States was fourth with 72.20 points ahead of Russia’s 15-year-old double world junior champion Alexandra Trusova, who scored 71.45.

In the ice dance, after the rhythm dance, France’s Gabriella Papadakis and Guillaume Cizeron lead with 83.83 points ahead of two US pairings - Madison Hubbell and Zachary Donohue, who are on 82.72, and Madison Chock and Evan Bates, who are on 81.67.

The men's and women’s competition, and the ice dance, are due to conclude tomorrow.

Yesterday, Nathan Chen of the US achieved a personal best in the men's short programme to leave himself as the favourite to claim the gold medal.