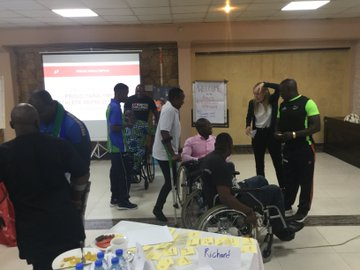 Uganda Paralympic Committee (UPC) has hosted a "Proud Paralympian" workshop to give key information to athletes aspiring to compete at the Paralympic Games.

The UPC ran the workshop in collaboration with the Agitos Foundation, the development arm of the International Paralympic Committee (IPC).

The Agitos Foundation has regularly held Proud Paralympian workshops, designed to support athletes' development on the field of play, as well as individuals and active citizens.

The three-day event in Uganda's capital Kampala saw attendees learn about the history of the Paralympic Movement and the sports they participate in.

Interacting with the media was among other topics covered, along with human rights in the context of ability, ethics, athlete health and well-being.

Participants were also given information regarding the dual career strategy, where an athlete seeks to compete while pursuing either education or work.

South Africa’s 13-time Paralympic swimming gold medallist Natalie du Toit was among those to attend the event to share her knowledge.

UPC President Mpindi Bumali claimed the event had been a success.

"One of the major factors that attracted the event to Uganda was the fact that the nation has two representatives at the Africa Paralympic Committee," Bumali said, according to Kawowo Sports.

"It’s been resourceful in many ways especially in capacity building as well as having a couple of athletes touring Uganda to examine our sporting conditions as well challenges they can jointly work on."

Athletes representatives from several countries attended the event, as well as from hosts Uganda.