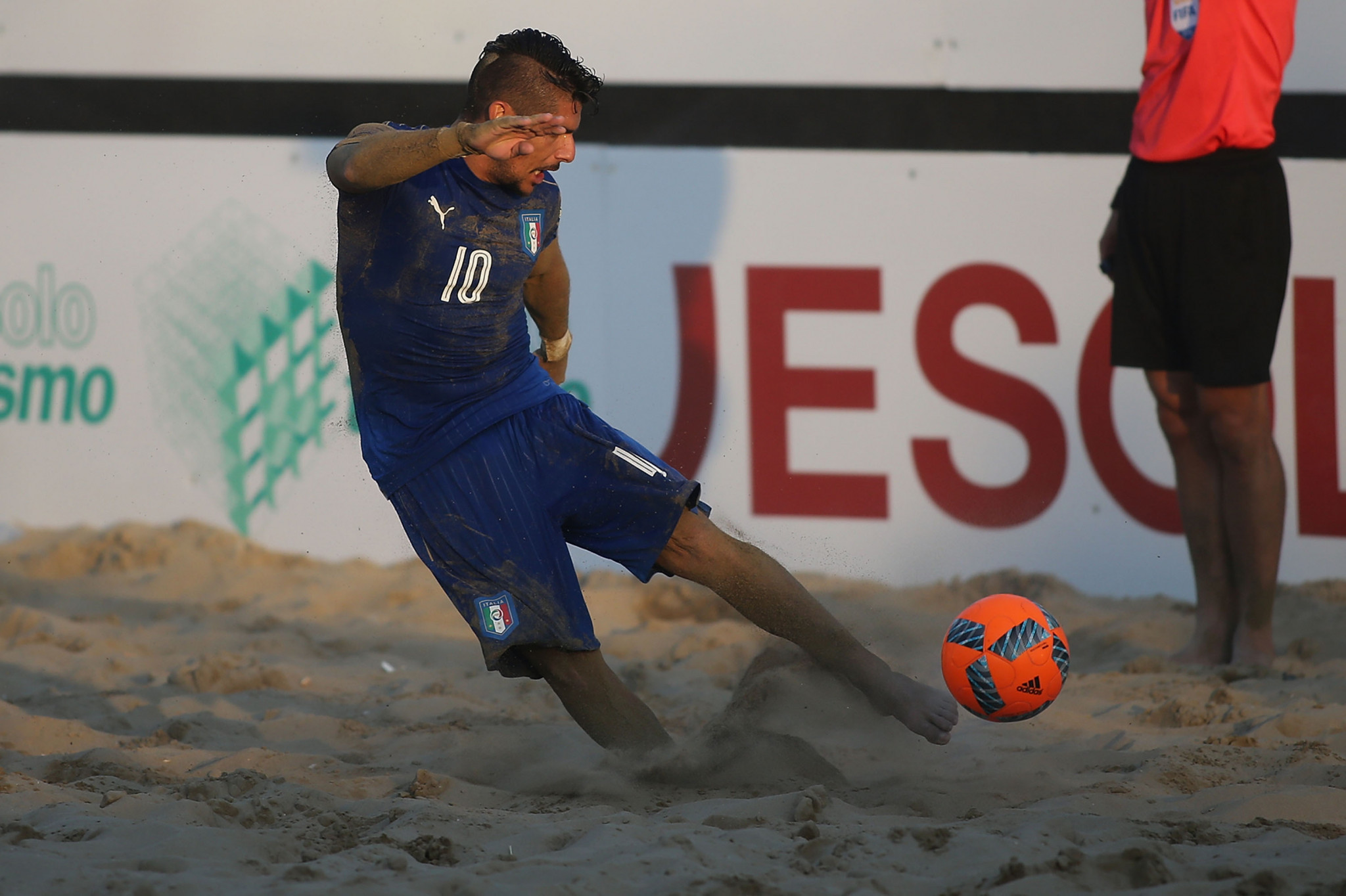 Italy will meet Portugal in the final of the FIFA Beach Soccer World Cup after both came through dramatic last four clashes in Paraguay.

The Italians saw off Russia 8-7 after a thrilling game went to extra time at Los Pynandi Stadium in Luque.

Portugal's match with Japan also went to extra time with the Europeans winning a penalty shoot-out 2-1 after a 3-3 draw.

Both Italy and Russia had to endure a rainstorm during their semi-final which constantly shifted back and forth.

Russia, who stunned holders and 14-time winners Brazil in the quarter-finals, went in front after three minutes thanks to Andrei Novikov's free kick.

Italian skipper Francesco Corosiniti drew his side level with a header and Dario Ramacciotti then pounced on a mistake by Alexey Makarov to leave the Azzurri 2-1 up at the end of the first period.

Makarov's top corner drive drew two-time winners Russia level and made amends for his earlier error, but it was soon advantage Italy again thanks to Ramacciotti's second of the game.

Fedor Zemskov then came to the fore with two strikes which had the Russians leading 4-3 going into the final period.

A crazy 25th minute of the match featured three goals with Italy's Gabriele Gori, the tournament's leading scorer, netting twice either side of a Kirill Romanov strike to leave the match poised at 5-5.

Ramacciotti completed his hat-trick and Gori, who now has 16 goals in Paraguay, also sealed his treble to put Italy in command.

But Romanov and Makarov both found the target again to send the game to extra-time at 7-7.

📣 Ladies & gentlemen, presenting the finalists of the 2019 #BeachSoccerWC 🏖

Who do YOU think will be lifting the 🏆 tomorrow? 🤔 pic.twitter.com/9uNAZM0Tqn

It was left to Emmanuele Zurlo to score the winner from the penalty spot after Artur Paporotnyi's red card, as Italy continued their quest for a first-ever Beach Soccer World Cup title.

"That was probably the craziest match I've ever played in, not only because of the wind and the rain, but also because of the lead changes," said Italy goalkeeper Simone Del Mestre.

Portugal, who won the competition in 2001 and 2015, had brothers Be and Leo Martins to thank as they netted all of their goals.

Leo put his side in front but Japan turned things around to lead 2-1 early in the second period thanks to goals from Ozu Moreira and Shusei Yamauchi.

Be Martins scored a quickfire double in the third period to put his side in command but Takuya Akaguma then netted with less than a minute left to force extra time.

No more goals arrived and with rain pouring down during the shoot-out, Portugal advanced thanks to strikes from Madjer and Coimbra.

Yamauchi scored for Japan but Moreira and Teruki Tabata both missed to send their side out.

"This is not a victory of the Martins brothers, but of Portugal," said Be Martins.

"Without the trust of the team, none of us could accomplish anything.

"That is our virtue, we share responsibilities and deliver."

The final will be played tomorrow, after Russia and Japan meet for bronze.