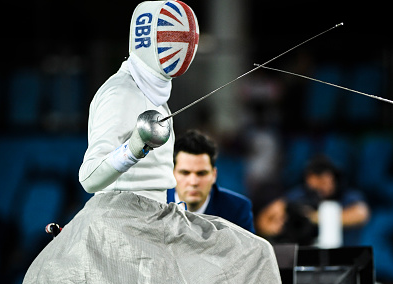 Gilliver produced an impressive series of victories at Sporthallen Zuid, including a quarter-final win over China's Tian Jianquan, 15-11.

He claimed the narrowest of semi-final victories by securing the decisive final point of the contest with Sun Gang.

The point saw him triumph 15-14 against the Chinese player, who had yesterday won the foil title.

Gilliver sealed the gold medal by defeating Russia’s Shaburov 15-9 in the final, with China's Zhong Sai Chun and Sun taking the bronze medals.

Greece's Panagiotis Triantafyllou emerged as the gold medallist in the men's sabre B competition.

He beat Russia's Istvan Tarjanyi 15-9 in the final.

The women's foil A and B competitions were also held.

Hungary's Zsuzsanna Krajnyak triumphed in the A competition, after overcoming Ukraine's Nataliia Morkvych 15-12 in the final.

Eva Andrea Hajmasi claimed a bronze medal after losing to her compatriot Krajnyak in the semi-finals, with Italy's Andrea Mogos earning the final podium spot.

Paralympic champion Beatrice Vio took gold in the B event.

She dominated the gold-medal match against China’s Zhou Jingjing, with the Italian winning 15-4.

The World Cup will conclude tomorrow with the men’s foil and women’s epee team events.