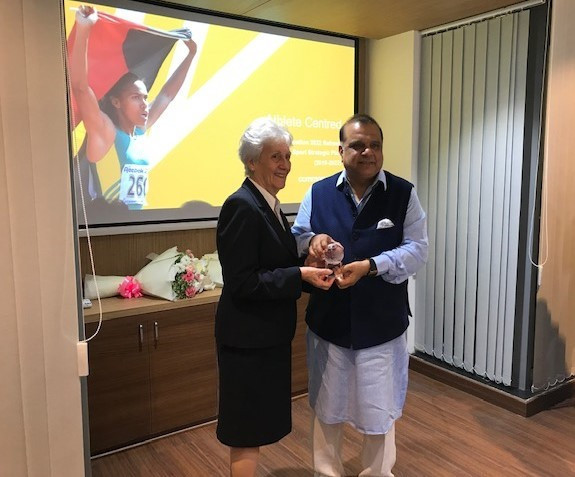 The Commonwealth Games Federation (CGF) claim they are committed to working with the Indian Olympic Association (IOA) to address their concerns over the omission of shooting from Birmingham 2022.

The CGF have expressed confidence athletes from India will compete at the Games, following talks with the IOA in New Delhi today.

CGF President Dame Louise Martin and chief executive David Grevemberg met with IOA President Narinder Batra, who has led calls for India to boycott Birmingham 2022 in protest at shooting's omission from the programme.

Batra had also called the Commonwealth Games a "waste of time and money" and criticised the standard of competition.

The CGF have claimed talks with Batra and IOA secretary general Rajeev Mehta had been "very positive".

"The CGF appreciates the concerns expressed by India about the non-inclusion of shooting as a competitive event at Birmingham 2022 and we are committed to working together for finding a solution to this," they said in a statement.

"We have also agreed to work closely to help strengthen India’s voice and presence across the Commonwealth Sport Movement.

"Following our discussions, the CGF are increasingly hopeful that the athletes of India will compete at the Birmingham 2022 Commonwealth Games.

"We acknowledge and respect that this decision will ultimately be taken by the sports community of India but have been delighted with the opportunity to discuss the refreshed vision of the Commonwealth Sport Movement and India’s important role in achieving it."

The CGF has insisted the sport programme for Birmingham 2022 is final.

There have been calls for a Commonwealth Shooting Championships to be held nearby during Birmingham 2022 in an attempt to appease India.

Approval would need to be given by the CGF for the event to take place.

Martin and Grevemberg had also visited venues from the Delhi 2010 Commonwealth Games on the first day of the visit.

The pair also spoke to members of the IOA Athletes' Commission.

The visit is due to conclude tomorrow when Martin and Grevemberg meet with the Governor of Punjab, V.P. Singh Badnore.

We are delighted to be in India where we have been visiting some of the venues from #Delhi2010 🇮🇳🇮🇳🇮🇳
It is a great to see a strong Commonwealth Games legacy with many of India’s best athletes training at these world class facilities 👏👏👏 pic.twitter.com/wgDBW2SYzq

"We are confident that our important visits to Delhi and Punjab will significantly strengthen our relationship as we move forwards," the CGF said.

"The CGF and the IOA recognise the significant positive sporting legacies created from the Delhi 2010 Commonwealth Games in terms of both sport participation and high performance across the country.

"The CGF commends the leadership of the Minister of Youth Affairs and Sport Kiren Rijiju for championing the open and inclusive free use of Delhi 2010 venues for sport development and competition.

"An important part of the CGF visit has been to witness and celebrate the continuing positive legacies of the Delhi 2010 Commonwealth Games.

"The CGF are also convening with athletes and officials across Indian sport to discuss the future of Commonwealth Sport."