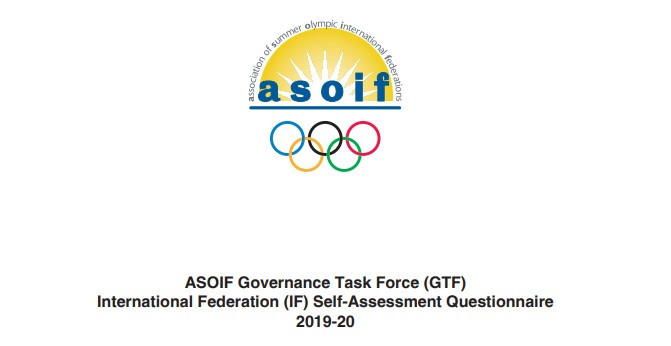 Members of the Association of Summer Olympic International Federations (ASOIF) have received a self-assessment questionnaire as part of the umbrella body's third governance review.

The start of the third review undertaken by the organisation was among the topics discussed at the first meeting of the newly composed ASOIF Council in Lausanne.

Safeguarding from harassment and abuse, as well as compliance with data protection and anti-trust legislation, feature in the questionnaire for the first time.

ASOIF warned earlier this year that the third review of the governance of International Federations would involve a more compliance-based concept.

The body has also told world governing bodies they will need to explore providing more transparency about the results as some of their scores have previously been anonymous.

It is claimed International Federations demonstrated progress over the first two reviews, but it was agreed much work remained to address "huge variations" in their governance.

Findings of the third review are due to be revealed at the ASOIF General Assembly in Beijing in April.

"In order to support this process, our Governance Support and Monitoring Unit continues to help IFs achieve progress in this important field."

The Olympic Games in Tokyo were also discussed during the meeting, following the conclusion of this year's test event schedule.

The Council claimed Tokyo 2020 were "well advanced" with their preparations but reiterated some International Federations had concerns which had not yet been addressed.

Concerns over the extreme heat during next year's Games prompted the International Olympic Committee to move the marathons and race walks from the Japanese capital to Sapporo, a decision heavily criticised by Tokyo Metropolitan Government officials.

In September, the Metropolitan Government sent proposals designed to ensure the safety of athletes after high levels of E.coli bacteria were found at a Tokyo 2020 venue.

The swimming part of the Paratriathlon test event was cancelled at the Odaiba Marine Park after fecal bacteria levels which far exceeded accepted limits were found.

The ASOIF Council was also updated on he outcomes of a new esports study, launched as part of the follow-up to the organisation's Future of Global Sport report.

According to ASOIF, the paper aims to "determine the major factors Olympic Summer IFs consider when deciding whether to adopt esports as a tool to digitise their sports offerings, and to establish the current status of the IFs’ engagement with esports in general".

Findings are set to be revealed this week, the body revealed.

The meeting of the ASOIF Council in the Olympic capital was the first to feature International Equestrian Federation President Ingmar De Vos and International Gymnastics Federation counterpart Morinari Watanabe, both elected in May.