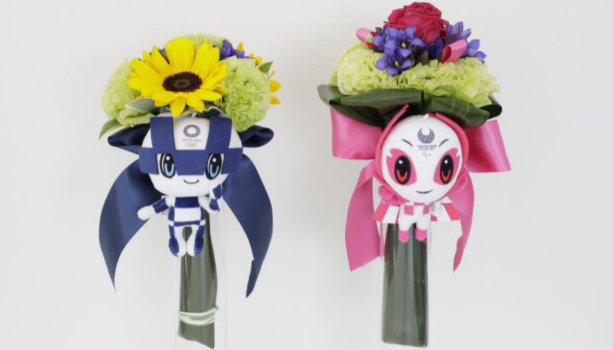 Tokyo 2020 has announced that flowers grown in areas affected by the 2011 Great East Japan Earthquake will be used in the bouquets presented to medallists at next year's Olympics and Paralympics.

The move is another example of organisers using the Games to promote hope and regeneration in the region hit by the disaster.

Around 16,000 people died after an earthquake and tsunami caused an accident at a nuclear power plant in Fukushima.

Organisers said the bouquets will feature "bright and vibrant colours that will appeal to a global audience".

Olympic and Paralympic mascots Miraitowa and Someity will be attached to the bouquets, with the designs proposed by The Nippon Flower Council.

Pictures have been released by Tokyo 2020 but the bouquets used at the Games will feature flowers that are in season at the time, so could appear different.

Five thousand bouquets will be prepared for the Olympic Games alone.

"The design of the bouquets incorporates bright and cheerful colours, I think they are gorgeous bouquets that will help share the athletes' moments of triumph with people around the world," said Tokyo 2020's chief operating officer Yukihiko Nunomura.

"In addition, I believe these bouquets will be a symbol of the progress of the reconstruction of the areas affected by the Great East Japan Earthquake, and will bring colour to the Tokyo 2020 medal award ceremonies."

The Japanese leg of the Olympic Torch Relay will begin in Fukushima in another example of the Games promoting the region.

Baseball and softball matches will also be held there with some using the term "Reconstruction Olympics".

Nobuo Isomura, chairman of the Nippon Flower Council, said: "Creating these bouquets using flowers raised mostly in the areas affected by the Great East Japan Earthquake will help convey our gratitude to the people of the world for their cooperation and kindness in the aftermath of the earthquake.

"It will also help encourage those in those affected areas.

"We will work with the flower industry to ensure we are ready for the delivery of bouquets at the medal ceremonies every day throughout the Tokyo 2020 Games."