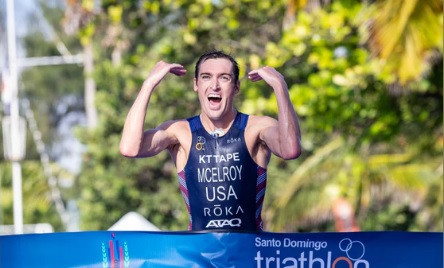 McElroy arrived in the Dominican Republic having won the last two men's races on the circuit and returned to the top of the podium with another assured performance.

The American crossed the line in 1hr 39min and 03sec in an event which started earlier than planned because of high temperatures.

Victory saw the 27-year-old cap off a dominant end to the World Cup campaign.

USA podium sweep in the men's field and Andrea Hewitt NZL back on top step in the women's race. 🙌

"I wanted to sit and make my move about one kilometre out, and I was able to do as I wanted," said McElroy.

"It all comes down to having a good team.

"Having a good support team, family and friends is what makes the difference.

"I am having fun and enjoying the races now."

Hewitt denied the United States another victory as she edged out Taylor Knibb by six seconds.

Claudia Rivas of Mexico came through to earn bronze.