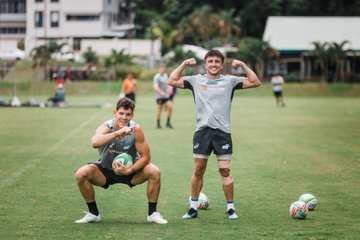 Australia and Samoa will battle for the Tokyo 2020 quota place on offer at the Oceania Sevens Championship in Suva after both teams reached the semi-finals.

The two teams were hoping to secure top spot in Pool B and C of the men’s tournament to advance to a semi-final at the ANZ Stadium, which effectively serves as a playoff for the Olympic Games.

Pool A featured the already Tokyo 2020 bound Fiji and New Zealand, who qualified through the 2019 HSBC World Rugby Sevens Series.

Samoa sealed top spot in Group B after adding to their two wins from the opening day of the tournament.

They claimed a 47-0 win over Tuvalu, before beating the Cook Islands 31-0 to clinch their fourth straight victory.

Australia boasted an identical record in Pool C with their team opening the second day with a 66-0 triumph against American Samoa.

A 24-0 win over Tonga sealed top spot and a semi-final date with Samoa tomorrow.

They concluded the pool phase with a 21-15 victory against New Zealand.

It was a second defeat of the day for New Zealand, who fell to a 17-14 defeat to Japan.

The result saw Japan advance to the semi-finals, where they are due to take on hosts Fiji.

RESULTS| Round 5 of the #Oceania7s Men's Championship.

Fiji topped the standings in Pool B of the women’s competition by beating the Solomon Islands 75-0, before overcoming Nauru 66-0.

The results gave Fiji three straight victories in the pool, with the Solomon Islands advancing in second after beating Vanuatu 27-5.

Fiji are set to face Samoa in the semi-finals of the Olympic qualifier, with Papua New Guinea playing the Solomon Islands.

The winners will compete in the Oceania Olympic qualifier final, where the Tokyo 2020 berth will be determined.

Australia and New Zealand will contest the Oceania International final, after the teams finished first and second in Pool A.

Both teams have already earned places at Tokyo 2020.