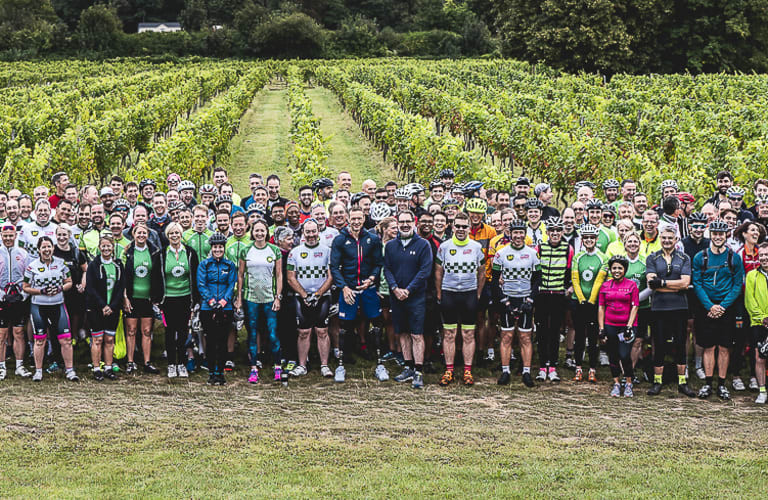 Nearly 300 employees of BP, a partner of the British Paralympic Association (BPA) since 2008, took to the roads of Surrey last month.

Helped by the motivational words of Great Britain's two-time Paralympic gold medal-wining sprinter and BP Ambassador Richard Whitehead, they cycled up to 100 kilometres.

Thanks to the generosity of the employees, as well as BP who matched donations, the biggest-ever total was raised since the first BP charity cycle ride took place nine years ago.

The event was set up by founding member Phillip Neal, BP’s director of digital workplace, back in 2011.

It came after he and a group of BP colleagues took part in a similar cycle ride elsewhere.

The group quickly realised there was scope to run something similar that would support one of the key values at BP - "One Team".

"We really wanted to organise an event that would allow people to get together, spend a day out on the bike, have fun – make some new acquaintances – while reaping the health benefits that go along with cycling," Neal said.

"We wanted to do something that was also about giving back."

The first ride saw around 150 riders take part and was said to have proved so successful that an annual event was soon established.

The emphasis is on inclusivity, and cyclists of all abilities and experience are encouraged to take part.

Planning for next year’s event is already underway, with the ride confirmed for September 2020 - not long after the Paralympic Games are due to finish in Tokyo.

"The BP One Team cycle ride is a fantastic event that goes from strength to strength each year and the ride is now one of the largest fundraising events for ParalympicsGB annually," Mike Sharrock, chief executive of the BPA, said.

"The support of BP’s employees is invaluable in helping us ensure our athletes are best prepared and able to perform in a way we know helps inspire change within society."

Peter Mather, group regional President Europe and head of country United Kingdom at BP, added: "Congratulations to all the riders who took part in the BP One Team cycle ride and who raised much needed funds for the British Paralympic Association, a BP partner for over 11 years.

"Diversity and inclusion is an important part of the company’s vision of breaking down barriers related to long-term illness, injury, and disability.

"The company’s support, including that of employees, for ParalympicsGB is essential in providing opportunities for Paralympic athletes to achieve their potential through sport."