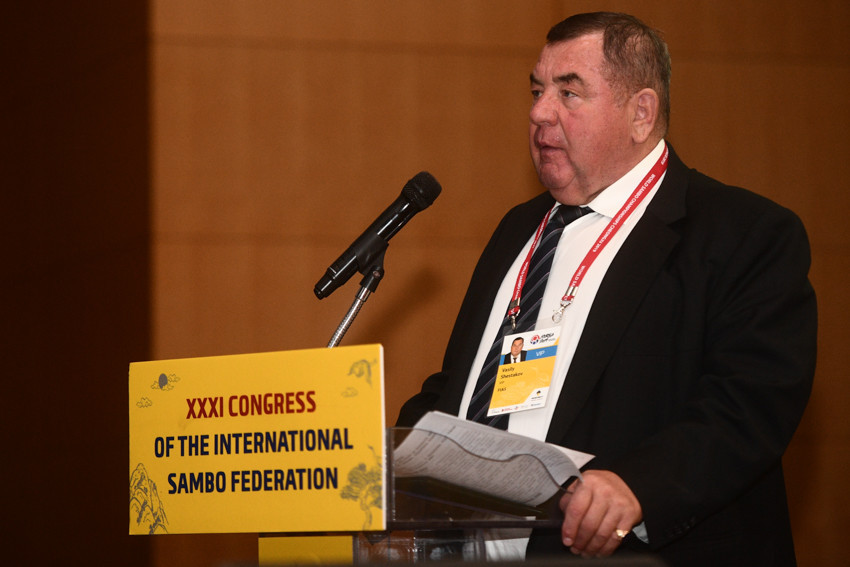 Omar Lopera and Vadim Rogach were approved as members of the International Sambo Federation (FIAS) Executive Committee during the FIAS Congress here in Cheongju.

Lopera, President of the Colombian Sambo Federation, was proposed by members of the Pan-American Sambo Union and will serve as a FIAS vice-president alongside the continental vice-presidents from Asia, Europe and Africa.

Rogach, President of the National Sambo Federation of Ukraine, joins the Executive Committee with both members being unanimously approved.

Lopera and Rogach are due to serve on the Committee until 2021, when the next FIAS Executive Committee elections will be held.

On a celebratory evening for sambo at Grand Plaza Hotel in the South Korean city, seven National Federations were elevated to full membership status.

The Sambo Federation of Australia Ltd and Egyptian Sambo Association were approved as candidate members.

During the Congress, FIAS President Visaly Shestakov praised a wonderful year for the Federation following its November 2018 award of provisional Olympic recognition by the International Olympic Committee.

Shestakov reminded delegates from the 79 National Federations present that FIAS has three years to show how it follows Olympic values and the regulations of the Olympic Charter.

He heaped praise on the development of the Federation between the 2015 European Games in Baku and this year's edition in Minsk, where eight weight categories in sambo had grown to 18 in the Belarussian capital, with 28 countries represented.

There was also acknowledgement of strong partnerships being forged, first with a Memorandum of Understanding with World Taekwondo to develop sambo through youth ranks, and secondly with broadcaster Eurosport, making sambo more visible on a global scale.

FIAS Athletes Commission chair Laure Fournier told delegates she had benefited from the opportunity to visit the World Anti-Doping Agency Symposium in Lausanne earlier this year.

"The symposium brought sports people together to fight against doping," the French sambist, the 2018 women's 56 kilograms world champion, said.

"I also visited the International Athletes Forum and it gave us the chance to discuss and make our community work better and in a more effective way.

"We discussed and learned more and it allowed me to speak with International Olympic Committee President Thomas Bach about sambo in the Olympic Movement."

Fournier revealed she hoped FIAS would be able to budget for further projects which would allow for meetings between athletes at championships to promote the sport worldwide.

Chief executive Michal Buchel updated the Congress on FIAS' numerous commissions and confirmed that from 2021 the Federation would be reducing its weight categories from nine for men, women and combat events, to seven.

The move is seen as a method of streamlining competition.

"We think about being more competitive and attractive for multi-sport events and for the Olympics to cut it down," Shestakov said.

"It also will make our competitions more sustainable and spectacular."

The Congress was also told that FIAS would maintain its investment to women in sport.

"We are grateful that there are more and more women in sambo," added Buchel.

"FIAS is working very closely with the IOC on improvements and has worked with the National Federation of Colombia on the women in sport seminar."

Buchel announced details of the "Queen's Project" would be be released later this year.

The World Sambo Championships begin in Cheongju tomorrow, with the three-day competition concluding on Sunday (November 10).