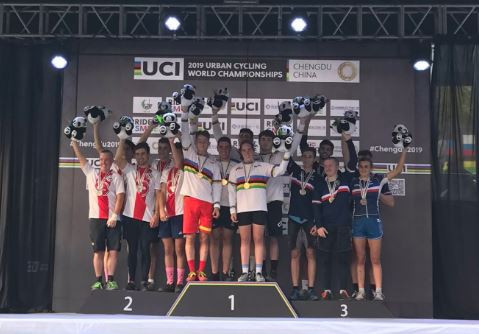 The defending champions were in the bronze-medal position after the first set of riders had completed their rounds, trailing the French team by 20 points at Xinhua Park in the Chinese city.

But the rising star of Spanish and world trials Vera Barón was still to go and she helped the team rise to the top of the podium.

Switzerland also overhauled their French rivals to finish in second place on 630 points, with France having to settle for bronze on 570 points.

Tomorrow, the semi-finals of the men's junior 20" and 26" take place, as well as the women's semi-finals, with Germany's Nina Reichenbach seeking a third successive world title.

The BMX Flatland made its World Championship bow with both men's and women's qualification beginning in Chengdu.

Flatland involves performing tricks on a flat piece of ground, often while balancing on a single wheel, and participants will be judged on the difficulty and originality of their tricks as well as their style.

Chilean Benjamin Hudson Araya was the best of the men's qualifiers on 88.45 points, with Czech Republic's Dominik Nekolny second on 87.87 points.

Julia Preuss from Germany topped the women's standings on 74.50 ahead of tomorrow's semi-finals.