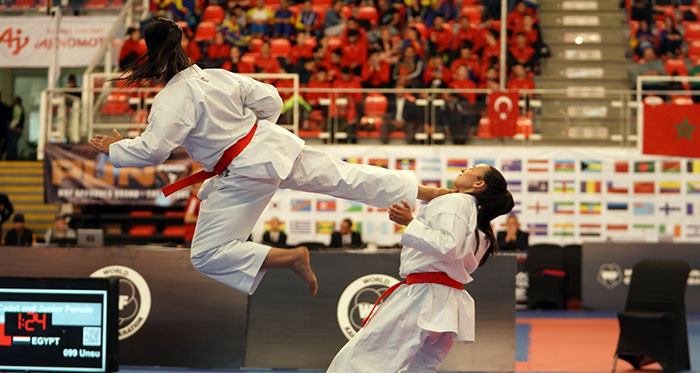 Egypt finished top of the medals table after winning two gold on the final day of the World Karate Federation Cadet, Junior and Under-21 Championships in Santiago.

The North African nation ended the Championships with a total of 19 medals, including seven golds.

Today's action was headlined by finals in the under-21 women's kumite divisions and in team kata.

Egypt closed the event in style by winning the cadet and junior men's team kata title after their performance was rewarded with 23.68 points.

Valentina Toro topped the podium in the women's under-55kg category as she overpowered Turkey's Gulsen Demirturk 4-0 in a one-sided final.

Gwendoline Philippe of France sealed her third consecutive under-21 world title in the under-61kg weight class.

Philippe, second on the WKF's senior world rankings, arrived in the Chilean capital as the red-hot favourite and lived up to her billing with a 4-2 victory over Alessandra Mangiacapra of Italy in the final.

Niswa Ahmed added to the French's team success on the last day of the competition as she beat Chaimae Elhayti of Morocco 4-1 in the final of the under-50kg kumite event.

The Championships were held despite the widespread unrest and protests in the Chilean capital.

The WKF hailed the event as a "celebration of the sport overcoming adversities" in the South American country.