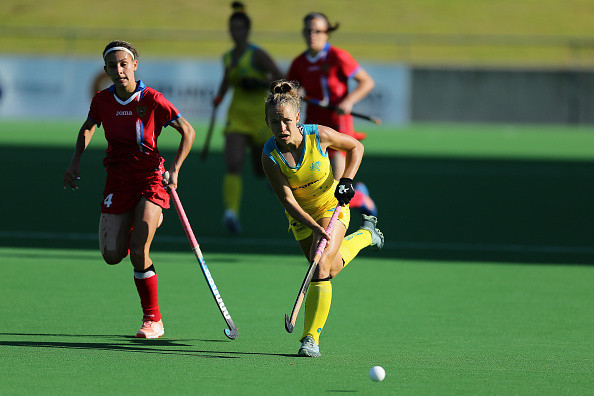 Australia moved a step closer to securing a place at the Tokyo 2020 Olympic Games with a 4-2 win over Russia in the first leg of their women's International Hockey Federation Olympic qualifier in Perth.

Emily Chalker got the home side off to the best possible start with the opening goal inside 21 seconds before Amy Lawton made it 2-0 shortly after.

Russia fought back to level against the run of play - and against the odds - thanks to goals from Bogdana Sadovaia and Alina Khalimova.

The joy for Russia was short-lived, however, as Grace Stewart put Australia back in front a minute after the equaliser at Perth Hockey Stadium.

Chalker's second of the match in the fourth quarter sealed victory for the world number two-ranked side.

Australia will look to secure their Tokyo 2020 berth when the two teams meet in the second leg tomorrow.

"We know they are a counter-attack team and they have some lethal strikers up front, so we had to build back into the game again after the momentum changed in Russia's favour," said Australia's Jane Caxton.

"But in the end we got two more goals on the board and that is what we needed."

Belgium also have a two-goal lead going into their second leg with China after they beat the hosts 2-0 at the Wujin Hockey Stadium.

Jill Boon opened the scoring for the visitors in the second minute, but they were made to wait until the dying stages of the match to double their advantage.

Stephanie Vanden Borre found the net in the 58th minute to put Belgium in pole position to qualify for next year's Olympics in the Japanese capital.

In the first leg of the opening men's tie, hosts Spain fought back from three goals down to draw 3-3 with France at Estadio Betero in Valencia.

The second leg takes place at the same venue tomorrow.