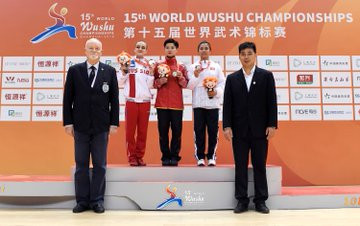 Iran's Elaheh and Vietnam's Nguyen Thi Chinh were the two sanda gold medallists on day three of the World Wushu Championships in Shanghai.

Nguyen triumphed by the same scoreline over Egypt's Yasmin Ewida in the women's 48kg title contest.

There was also success for Iran in TaoLu competition, with Mohammad Ali Mojiri Foroushani topping the men's nandao standings on 9.633 points.

China increased their gold medal tally to eight, four clear of second-placed Iran, thanks to wins for Liang Bi Ying in the women's taijiquan with 9.720 points and Guo Meng Jiao in the women's changquan with 9.696.