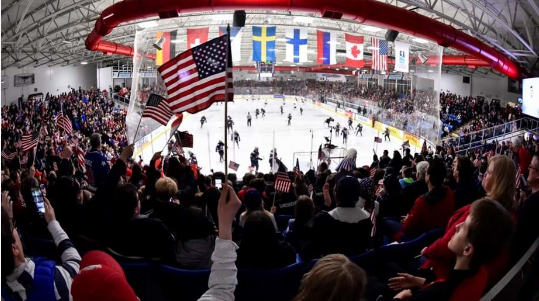 The schedule for the 2020 International Ice Hockey Federation (IIHF) Under-18 World Championship in Michigan has been approved by the global governing body and participating teams.

Hosts the Unites States, looking for a record-extending 11th triumph at the event, will open their Group B campaign against Russia at Plymouth’s USA Hockey Arena on April 16.

It will be a re-match of this year’s semi-final, where Russia beat the US 3-2 after a shootout.

The first game day in Group B will start with a match between Czech Republic and Germany.

Finland also feature in the same section and will open the tournament one day later, on April 17, against Russia.

In Group A, to be played at the Ann Arbor Ice Cube, Sweden will open their title defence against Belarus on April 16.

It will be preceded by a clash between Switzerland and Latvia earlier in the day.

Group A also includes Canada, who will enter the tournament against Sweden on April 17.

The group stage will be played until April 21 and will be followed by the quarter-finals, staged across both venues, on April 23.

The IIHF Under-18 World Championship will be held in the US for the third time, following editions in Fargo and Moorhead in 2009 and Grand Forks in 2016.

This time, the event will come to the home base of USA Hockey’s national team development programme, the USA Hockey Arena, where the under-18 and under-17 national teams are centralised.

Tickets for the 2020 IIHF Under-18 World Championship are due to go on sale later this year.