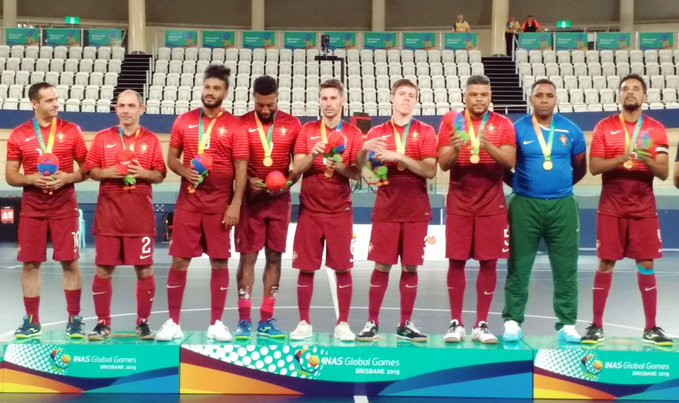 Portugal triumphed in the futsal competition on day seven of the International Federation for Athletes with Intellectual Impairments (INAS) Games in Brisbane.

The Portuguese side thrashed Saudi Arabia 10-2 to take gold at Anna Meares Velodrome in the Australian city.

France were the silver medallists, having overcome Poland 6-3.

Meanwhile, the finalists of the men and women's basketball competition were decided at Hibiscus Stadium.

Australia Gold got past France 16-6 to reach the women's gold medal match against Japan, who were 20-6 victors over Australia Green.

The hosts will also have a team to cheer on in the men's event, with Australia crushing France 86-42 to reach the final.

They will meet Portugal, 61-50 winners over Poland.

There was misery for Australia, however, in the cricket final at Allan Border Field.

England triumphed against their rivals by 101 runs, restricting Australia to 89-9 from their 20 overs.

At Queensland State Athletics Centre, a number of Global Games records were broken on the final day of the athletics competition.

Deliber Rodriguez of Spain was the silver medallist in 1:58.07, while Andrew Semmens of Australia finished third in 1:59.39.

Rafaelle Di Maggio and Ruud Lo Koutiki Tsilulu of Italy finished second and third with times of 22.72 and 22.83 respectively.

Three more wins came for the South American country in the relays as they triumphed in the women's 4x100m and and men's 4x400m II-1.

The Global Games conclude tomorrow with the basketball finals and competition in track cycling.