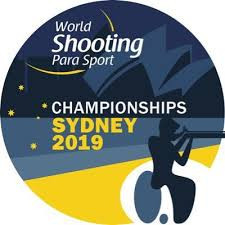 The Serbian was the most consistent shooter on a windy day at the outdoor 50m range at the Sydney International Shooting Centre, securing his first global crown in the event with a total of 246.8 points.

Spectators held their breath on the final shot between Ristic and Ukraine's Vitalii Plakushchyi, with the duo locked at 236.8 points.

"I saw the wind become stronger and thought, 'should I wait a few more seconds?'" Ristic, who finished fourth at the 2018 World Shooting Para Sport Championships in South Korean city Cheongju, said.

"I waited to the moment when the flag lowered, then I shot.

"But I waited and waited for Vitalii to shoot."

He added: "I shot very well in the final, better than the qualification, so I felt good coming in."

Raise your hand 🙋‍♂️🙋‍♀️if you're enjoying our Worlds in Sydney! 😍

This Friday (18 October) is the last competition day!
Don't miss the live stream!

The two were locked at 215.0 points entering the final two-shot series.

Uncharacteristically, Javanmardi hit the nine ring twice to finish on 233.6 points, while Liakhu shot her best throughout the final to manage 10.2 and 10.6 and end on 235.8.

The bronze medal went to Turkey's Ayşegül Pehlivanlar with 214.2 points.

Moskal, who turns 25 later this month, had only been shooting visually impaired for three years.

Going into the final series, she already had a strong enough lead over Austria's Patrick Moor and ultimately triumphed with a world record-breaking score of 214.3 points to her nearest challenger's 202.2.