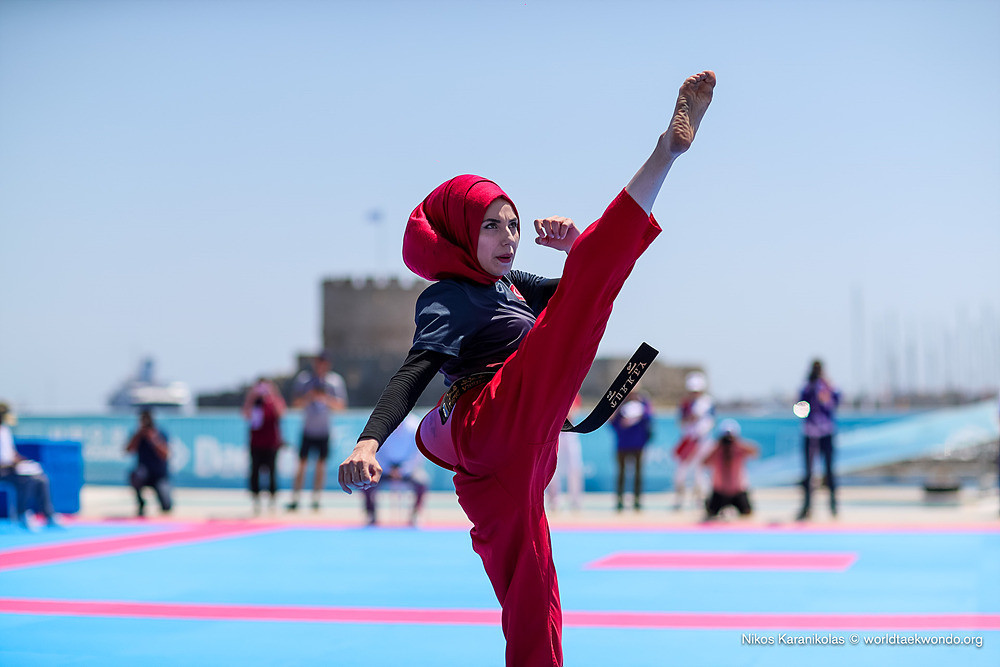 Freestyle poomsae exponents were the first to mount the podium on the opening day of the World Taekwondo Beach Championship at Egypt’s Red Sea resort of Sahl Hasheesh.

Spain’s Miguel Barreiro Estevez claimed victory in the individual male over-17 category with an average of 6.566 points, with the other medals going to Thai athletes.

The individual women’s over-17 title went to Thailand’s Kotchawan Chomchuen, who beat Marina Popova of Russia in the final, 5.133 points to 3.133.

In the under-17 pairs final, Sippakorn Wetchakornpatiwong and N Pitinanon held off the challenge of fellow Thai athletes Worapol Sianglio and K Jareonyin to claim gold, by 6.500 to 6.099 points, with bronze going to home pairing A Hussein and F Mohamed.

In the recognised poomsae contest, tomorrow’s individual male under-17 final is set to be contested between home athlete Aly Mohamed and Thailand’s Wetchakornpatiwong.

The Thai athlete had won his quarter-final against Morocco’s Omar Kostit before beating the seeded Saoud Maatugh of Libya.

The individual male under-30 final will be between Germany’s Shajan Sepanlou, who beat Thailand’s freestyle silver medallist Khopana, and Sune Ostli of Norway, a winner over Libya’s Ahmed Ibrahim Ali.

The individual men’s over-30 final will see home athlete Abdelfattah Metwally against Iraq’s Aras Omer Mohammed Ali, after they had earned respective wins over Ali Adnan Almudali and Zuhair Hasan a Abu Alraha, both of Saudi Arabia.

In the individual women’s over-30 final gold is destined for either Bahrain’s Fajar Al-Binali, who beat Iceland’s Maria Gudrun Sveinbjornsdottir, or Baerbel Reiner of Germany, who earned a win over Russia’s Popova.

In recognised poomsae pairs, the under-17 finalists will be S Sirisinru and N Pitinanon of Thailand and their compatriots Sianglio and S Chuphon.

In recognised poomsae team competition, the under-17  men’s final will see Egypt’s A Ghoneim, E Wardany and A Mohamed meet Thailand’s  Wetchakornpatiwong,  Sianglo and  Sirisinru.

In the men’s over-17 final Egypt’s A Hesham, N Gendy and A Fawzy will face Thailand’s T Bompentho, C Khopana and P Sengmuean.