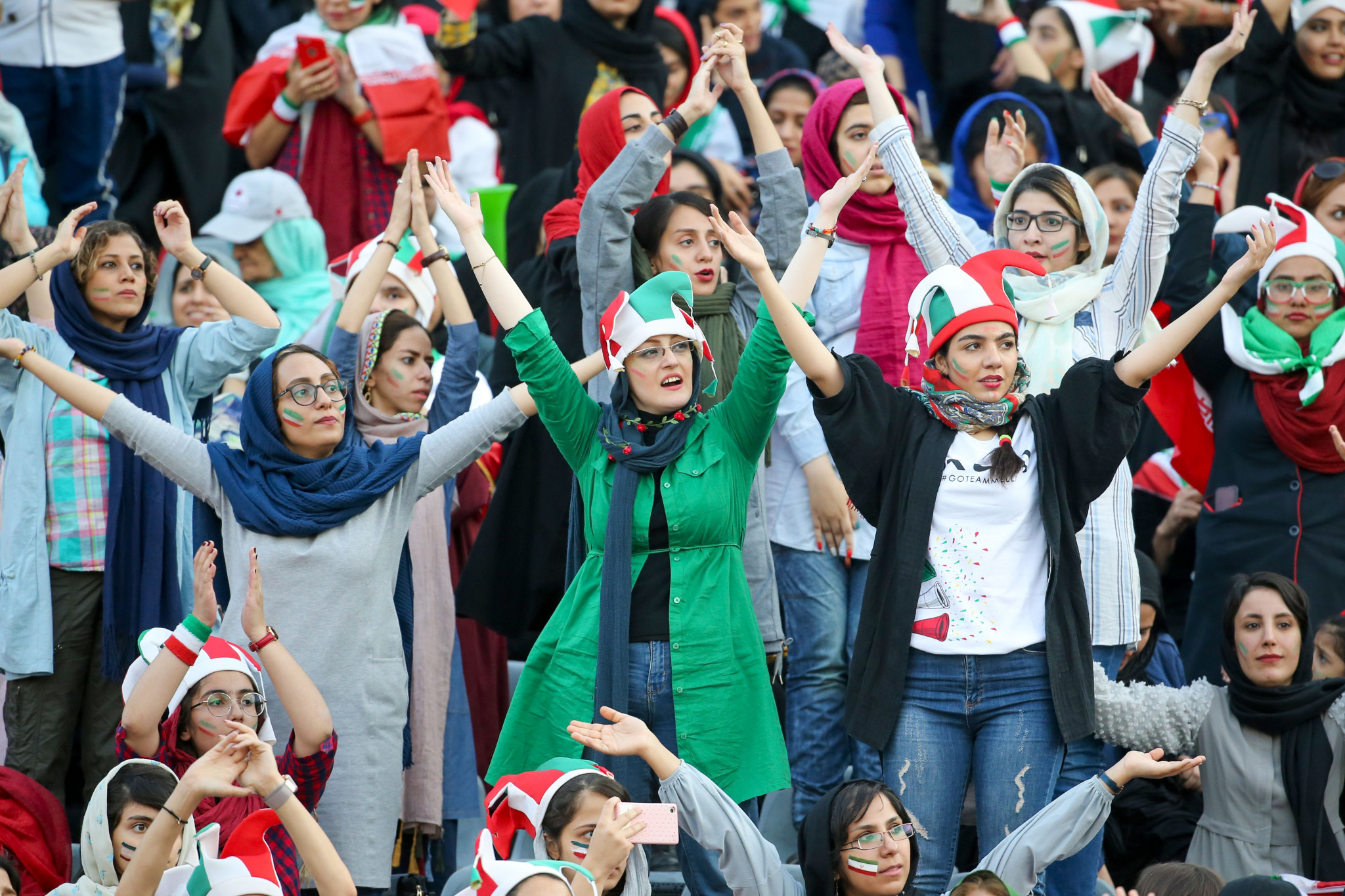 History was made at Tehran's Azadi Stadium as 4,600 women were permitted entry for the first time in almost 40 years to watch Iran's FIFA World Cup 2022 qualifier against Cambodia.

An unofficial ban on women entering stadiums had been in place since the 1979 Islamic Revolution, but came to an end as women flooded into the stadium to watch their side's 14-0 triumph.

The Iranian Football Federation (FFIRI) initially allocated 3,500 tickets for women after pressure from FIFA and human rights groups in the wake of protester Sahar Khodayari's death in September.

Khodayari set herself on fire outside a court in Iran's capital city after she was summoned to face charges for attempting to enter the Azadi Stadium disguised as a man.

When the tickets sold out in less than an hour, an additional 1,100 were made available.

Men and women were kept apart inside the Azadi Stadium, with special sections set aside under gender segregation.

Football fans took to social media after the game to celebrate a victory for women in Iran, with emotional scenes from Tehran trending on Twitter.

Watching Iran ?? vs. Cambodia ?? and totally forgot that Keisuke Honda was their manager. Classy move by him taking selfies with the women attending the match today ?? pic.twitter.com/FvqbUhjHDf

The Iran Human Rights group posted a small video showing the jubilant scenes as history was made, while Cambodia manager Keisuke Honda posed for pictures with Iranian women ahead of the match.

Abbasali said afterwards: "I didn't think we could come to the stadium one day, but I'm happy it has happened."

Many are heralding a new dawn for female sports fans in Iran, but Amnesty International has hit out at FFIRI's relaxation of the ban as a "cynical publicity stunt".

He said prior to the game: "Iran's decision to allow a token number of women into the stadium for tomorrow's football match is a cynical publicity stunt by the authorities intended to whitewash their image following the global outcry over Sahar Khodayari's tragic death.

"Anything short of a full reversal of the ban on women accessing all football stadiums is an insult to Khodayari's memory and an affront to the rights of all the women of Iran who have been courageously campaigning for the ban to be lifted."

Amnesty also called on Iranian authorities to immediately drop all charges against women facing prosecution for attempting to enter a football stadium or protesting such restrictions.

"The Iranian authorities should lift all restrictions on women attending football matches, including domestic league games, across the country," added Luther.

"The international community, including world football's governing body FIFA, must also ensure that women are permitted to attend all matches freely and without discrimination.

"FIFA has a responsibility to respect human rights throughout its operations, and the power under its statutes to take definitive and urgent action to address a situation which it has allowed to continue for far too long."

"For the first time in nearly 40 years, several thousand women have been allowed into a stadium in IR Iran to watch a football match played by men.

"This is a very positive step forward, and one which FIFA, and especially Iranian girls and women, have been eagerly waiting for.

"The passion, joy and enthusiasm they showed today was remarkable to see and encourages us even more to continue the path we have started.

"History teaches us that progress comes in stages and this is just the beginning of a journey.

"Consequently, FIFA now looks more than ever towards a future when ALL girls and women wishing to attend football matches in IR Iran will be free to do so, and in a safe environment.

"There can be no stopping or turning back now.

"I would like to thank both the IR Iran FA, the AFC and the authorities involved for their efforts and cooperation.

"FIFA will continue to work closely with them, to help ensure that the right thing is done, which is to allow all fans, irrespective of gender, to have the chance to go to the stadiums and enjoy a game of football.

"But, above all, today I want to say a very big thank you and record our utmost respect to all of the Iranian girls and women who courageously stood and are standing up for their rights.

"FIFA fully supports them and will stand by them."

Holding our tears back as women in #Iran attend a football game in Azadi Stadium.

Sahar Khodayari self-immolated outside a courthouse where she was facing prosecution for trying to defy the state ban on women in stadiums https://t.co/AMUZaK0gax. pic.twitter.com/90SI12smnR

The ban on women entering stadiums has previously been relaxed, with 100 Iranian women allowed to watch the men's national team friendly against Bolivia last October, and 500 women attending the AFC Champions League final match in Tehran between Persepolis and Japan's Kashima Antlers the following month.

Those games resulted in a crackdown on women entering stadiums at other times, however, with several women arrested in June having put on fake beards and wigs to attend Iran's friendly against Syria.

During the last two years, at least 40 women were arrested for attempting to enter football stadiums in Iran.

In June, FIFA President Gianni Infantino wrote to the FFIRI to seek assurances that women would be allowed to attend 2022 FIFA World Cup qualifiers.

FIFA were criticised during the Women's World Cup when two fans were removed from a match between Canada and New Zealand, having entered the Stade des Alpes in Grenoble wearing tee-shirts that called for Iranian women to be let into stadiums.

FIFA backtracked on the ejection, saying the message was social and not political and therefore not breaching any rules.