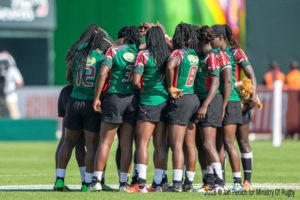 Kenya's women's rugby sevens team has been given an Olympic boost ahead of this weekend's Rugby Africa Women's Sevens tournament, with South Africa confirming they will not send a team to Tokyo 2020.

The tournament in Monastir in Tunisia serves as an African qualifier for next year's Olympic Games, with one spot available for Tokyo 2020.

Action begins at Mustapha Ben Jannet Stadium on Saturday (October 12), with the finals scheduled for the following day.

Rugby Africa President Khaled Babbou announced: "South Africa will only compete for a chance to qualify for the World Series qualifier event."

He added: "This is because South African Sports Confederation and Olympic Committee's internal rules not permitting them to qualify for the Olympic Games directly from the African Regional Qualifier tournament."

It is understood South Africa will instead use the African tournament as a warm-up to December's World Rugby Women's Seven's Series in Dubai.

Kenyan coach Felix Oloo claims his side will bid to defeat all opponents in the African qualifying tournament, where 12 teams will contend for one Olympic berth.

He said: "Our goal this season is to qualify for the Olympics.

"The girls have worked hard in training.

"After that we will look at the future competitions and plan accordingly."

📹 Watch the 🇺🇬 Lady Cranes perform their mantra on their way to the Olympic qualifier tournament: 🏉🏆 Rugby Africa Women's Sevens on the October 12 & 13
.@UgandaRugby#BecauseWeLoveRugby@sg_africa@societegenerale@RugbyAfrique#AfricaRugby7s#Rugby7s pic.twitter.com/Udqw5dw0PD

Kenya are the defending champions in Tunisia, but will face stern competition from Uganda, Tunisia and Madagascar.

Ghana make their debut in the championship as the lowest-ranked nation.

"Kenya may be the top-ranked side in the tournament as defending champions but we must tread carefully for the two days we will be playing.

"It is a long-term project and even after winning in Tunisia, we still have to fight to break into the world best 16 teams to earn the core status."

New Zealand, the United States, Canada and Australia secured their places at Tokyo 2020 in the 2018-19 Women's Sevens Series.

Brazil and Britain claimed their tickets to Tokyo in regional qualifiers.

Qualifiers in Asia and Oceania take place in November, with each tournament offering the regional winners one place at the Olympics.

An Olympic Qualifying Tournament will be held in June next year, where the final two spots in Tokyo will be confirmed.