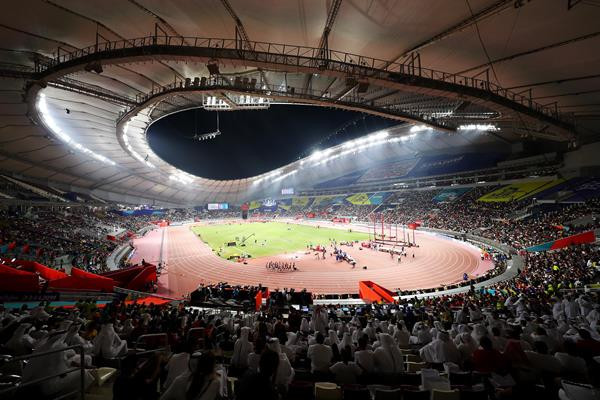 The International Association of Athletics Federations (IAAF) World Championships that concluded in the Khalifa International Stadium here last night were the "best in history" in terms of performances according to Sebastian Coe.

Speaking after the final evening session of an event that involved more than 200 nations, the IAAF President noted that six Championship records had been set, 43 countries had won medals, and athletes from 68 different nations had achieved at least one top-eight placing.

There have been 21 area records - double the number from London in 2017 - and 86 national records broken.

"For those who follow our sport closely, you will know that we rank our Championships on the performances of the athletes,” Coe said.

"It is how we, the athletes and the coaches measure our success.

"The world’s athletes have put on the best show in the history of the IAAF World Athletics Championships, according to the competition performance rankings which are used as an objective measure of the quality of international competition.

"These performances are incredible but credit must also go to the facilities and conditions provided by the host country.

"Doha has created conditions on the field of play and in the warm up that are unsurpassed.

"We are proud of the fact we reach more countries than any other sport.

"Just look at the breadth and depth - 43 countries on the medals table and 86 national records set.

"We want our athletes to experience different cultures and different conditions.

"It’s what makes our sport so accessible."

Dahlan Al Hamad, President of the Asian Athletics Association and vice-president of the Local Organising Committee, claimed Qatar was the ideal place to hold such an international event.

"There are generations here who are hungry to have this kind of sporting event here," he said.

"Qatar is a nation of more than 100 communities.

"They have been able to celebrate their athletes from all around the world."

The shot put provided the three top-ranked men’s performances, with Joe Kovacs of the United States, who won with 22.91 metres, scoring 1,295 points on the IAAF tables, one more than compatriot Ryan Crouser and New Zealand’s Tom Walsh, who both threw 22.90m.

The staging of the road events in hot and humid conditions that were only partially mitigated by start times at midnight on the Corniche engendered much criticism and concern for participating athletes.

There were distressing scenes in the women’s marathon on the opening night, where temperatures were between 30-32.7 degrees and humidity at 73 per cent, causing 28 of the 68 starters to drop out.

Conditions grew marginally more favourable for the 50 and 20 kilometre race walkers, and while 18 of the 73 starters dropped out of the men’s race, the temperature was around 29 degrees and humidity had dropped to 48 per cent.

Air conditioning in the Stadium produced conditions that proved highly satisfactory for the majority of athletes, although the scant numbers who witnessed the early action opened the Championships up to criticism on another front.

While the response from the organisers was belated, the wider distribution of free tickets in the second half of the Championships created a markedly improved atmosphere, with Kenyan and Ethiopian fans in particular bringing noise and vibrancy to the occasion.

On Friday (October 4), the first day of the weekend here - a crowd of 42,180 filled the Stadium and witnessed local hero Mutaz Essa Barshim rising to the occasion with the successful defence of his men’s high jump title.

"Attendance numbers from Tuesday-Friday were on average over 20,000 and we expected additional fans to attend over the weekend as a result of advertising and marketing outreach to embassies, partners, schools and higher education institutions," local organisers said.

"The LOC, partners and public institutions purchased tickets and distributed them as part of our marketing outreach to embassies, employees, schools and higher education.

"We are delighted they are giving people the opportunity to attend a major international event and see Mutaz Barshim win gold."

"We are thankful for their support in reaching as many as possible in Qatar with athletics."