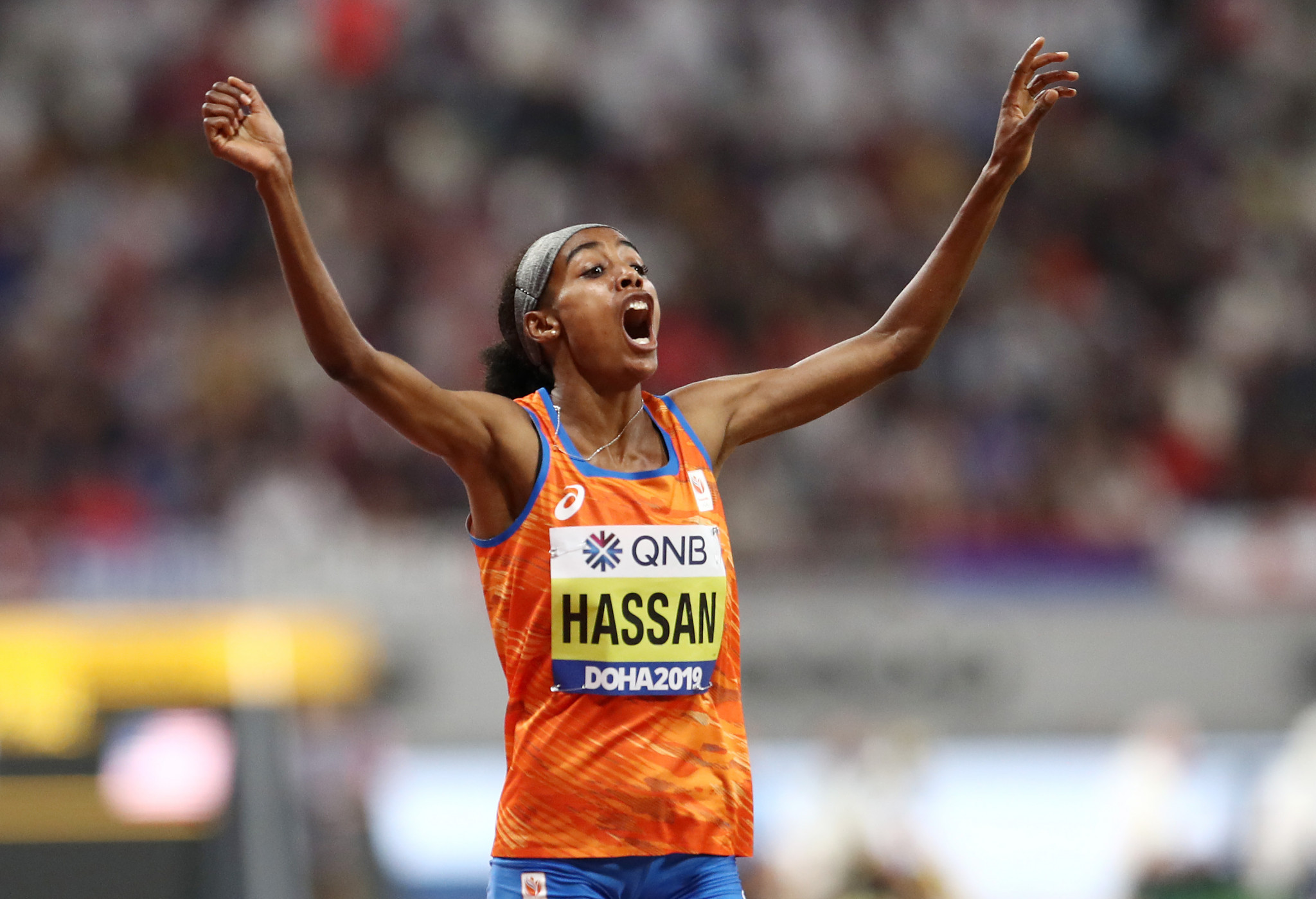 Sifan Hassan completed her golden double in defiant fashion here at the International Association of Athletic Federations World Championships, following up her 10,000 metres win with the 1500m title on a pulsating night that also contained the greatest shot put contest ever seen.

Top billing was hard to assign on a penultimate programme of action that also saw the United States men win the 4x100m title in the second fastest time ever.

Hassan, Ethiopian-born but representing The Netherlands, has been based at the Nike Oregon Project under the guidance of Alberto Salazar for the last year, and has had her Championship preparations severely affected by the fall-out from the latter’s four-year suspension by the United States Anti-Doping Agency announced last Monday (September 30).

"It was a hard win for me," said Hassan after finishing more than two seconds clear of a talent-packed field in a Championship record of 3min 51.95sec, having produced a sub-60 second last lap.

"I was just so angry with what people were saying.

"I’ve worked so hard to be on top over the years.

"It looked like this was easy but it took so much hard work."

Although Britain’s European champion Laura Muir moved up to challenge the Dutch athlete at the bell she was unable to maintain contact as the latter moved into a clear lead around the top bend.

Tchallenge was taken up by Kenya’s defending champion Faith Kipyegonm who has raced sparingly this year since have a child, but who maintained her form to take silver in a national record of 3:54.22.

Bronze went to Guday Tsegay of Ethiopia, in a personal best of 3:54.38, with Shelby Houlihan of the US fourth in a North American record of 3:54.99.

The men’s shot put saw three men finish within a centimetre of each other – with Joe Kovacs of the US regaining the title he won at Bejing four years ago after producing a final, staggering effort of 22.91 metres, putting him equal third on the all-time list.

Kovacs’ compatriot, the Rio 2016 champion Ryan Crouser, looked as if he might have produced an even greater final flourish shortly afterwards, but within seconds he was shaking his head incredulously as the digital scoreboard showed 22.90m.

Which in turn meant that the defending champion Thomas Walsh of New Zealand, who had responded to Crouser’s siege-gun opening salvo of 22.36m with what was, then, a Championship record of 22.90m, finished - incredibly - in bronze medal position, having failed to register a second-best effort to match the Olympic champion’s.

And Walsh was also shaking his head with a rueful smile after this truly monumental contest.

"It;s always good to PR )personal record) at a major championship," Kovacs, who took silver behind Walsh in London two years ago, said.

"And if you win - there’s nothing better."

A US men’s 4x100m relay team led off by individual 100m champion Christian Coleman and anchored by individual 200m champion Noah Lyles was always going to have a chance of gold - assuming they avoided the fallibility that has often dogged their nation’s sprint relay ambitions.

This they did as they delivered the baton all the way round in total security in 37.10sec - behind only the 36.84 recorded by the Jamaican team that Usain Bolt anchored to victory at the 2012 Olympic Games in London.

For the two men running the middle legs for the States - 37-year-old Justin Gatlin, the individual champion two years ago and silver medallist behind Coleman here last weekend, and 34-year-old Michael Rodgers - this was a welcome salve to the memories of disqualification at the 2015 World Championships in Beijing and the following year’s Olympics in Rio de Janeiro.

Despite losing their title, the British quartet of Adam Gemili, Zharnel Hughes, Richard Kilty and Nethaneel Mitchell-Blake were also left smiling as they put it all together to take silver in a European record of 37.36, eclipsing the time of 37.47 they had run in securing a home victory two years ago.

Bronze in a contest that delivered on all it had promised went to Japan, who broke through with a superbly coordinated effort that ended with Abdul Hakim Sani Brown briefly threatening to overtake Mitchell-Blake on the last leg before crossing in an Asian record of 37.43.

The effervescent Rojas produced the clinching effort of 15.37m in the second round of the triple jump.

On a night of stupendous competition, the women’s 5,000m final held its place as Kenya’s Hellen Obiri retained her title in a Championship record of 14:26.72 in a pulverising race that saw eleven of those athletes strung out behind her breaking their personal bests.

The Kenyan, who also won this year’s IAAF World Cross Country title, was suitably rewarded for a run of utter determination from the moment she took the lead towards the end of the second lap - a lead she never relinquished.

Her team-mate Margaret Kipkemboi came through to overtake Konstanze Klosterhalfen in the home straight for silver clocking a personal best of 14:27.49, with the German taking a richly earned bronze in 14:28,43.

Anchor runner Shericka Jackson, the individual bronze medallist, was chased home by Britain’s Daryll Neita, who secured silver in 41.85 for a team to which individual 100m silver medallist and 200m gold medallist Dina Asher-Smith had been added.

Bronze went to the United States, for whom Kiara Parker crossed in 42.10.