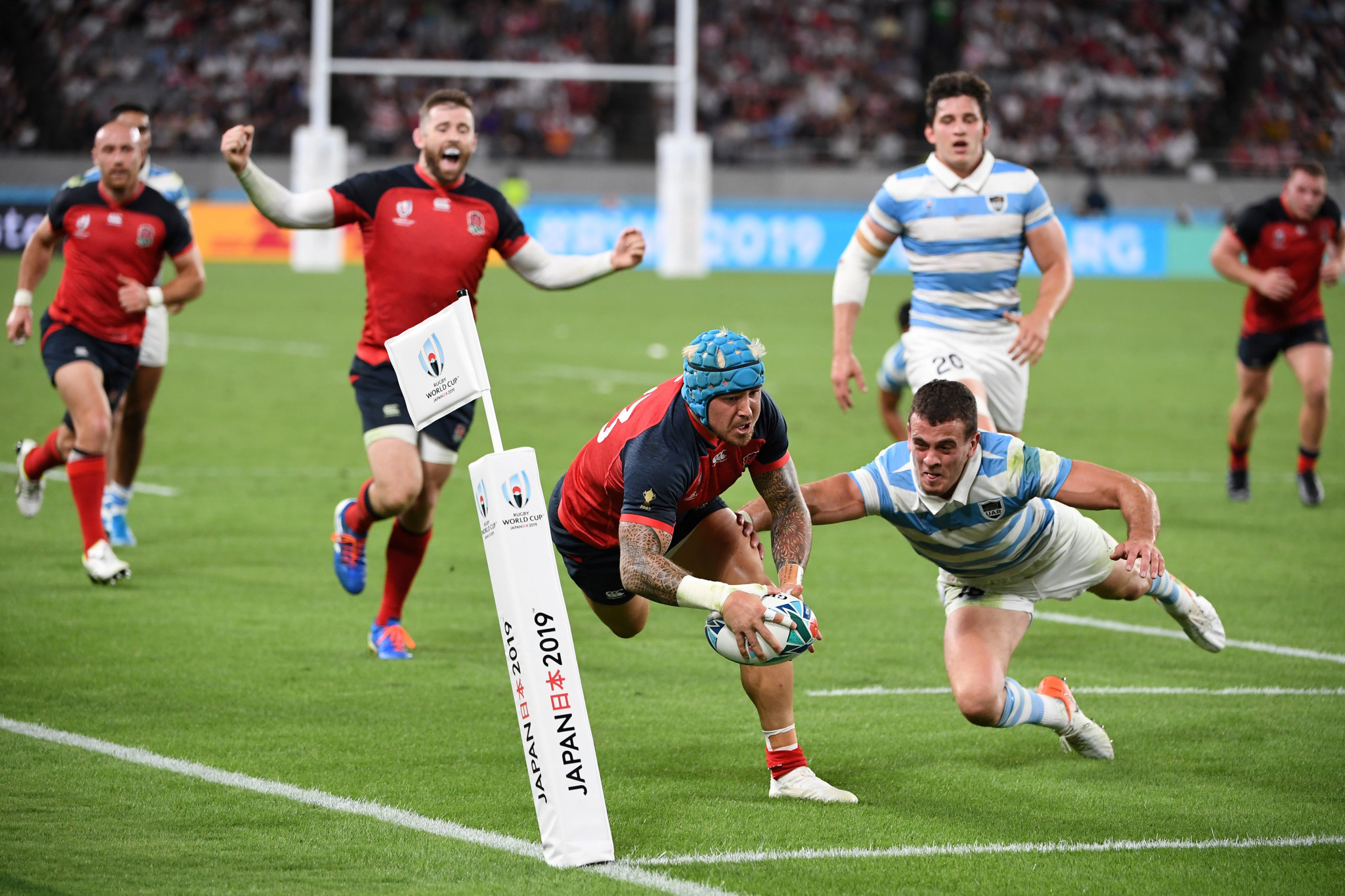 In a bad-tempered Pool C clash at Tokyo Stadium, England became the first team to make the quarter-finals at the Japan Rugby World Cup, defeating Argentina 39-10.

Having lost to France 23-21 earlier in the tournament, the South Americans knew this was do or die and were immediately on the front foot.

England looked shell-shocked as Argentina ran the ball with purpose and dominated field position – and it was no surprise when flyhalf Benjamín Urdapilleta slotted home a penalty.

But England regrouped through their forwards, with George Ford delivering the perfect pass to Jonny May for the first try.

The touch-paper was lit on 10 minutes, when a late tackle on England halfback Ben Youngs sparked a huge melee.

England’s game was obviously affected by Argentina’s physicality, with four handling errors in the first 15 minutes.

However, Argentina shot themselves in the foot after 17 minutes, when second row Tomas Lavanini tackled centre Owen Farrell dangerously high with his shoulder.

Referee Nigel Owens had no option but to issue a red card.

It took another 20 minutes for England to cross the tryline, though, with Elliot Daly’s inadvertent juggle allowing him to slice through the backline.

Youngs, who usurped Jonny Wilkinson to become England’s most capped back, scored in first-half injury time after good work by Billy Vunipola and the lead at the break was 15-3.

Concerning for England was Farrell’s form with the boot, as he missed three conversions and a long-distance penalty in front of the posts.

But the second half saw Eddie Jones’ men quickly establish momentum, especially in the scrum, and Ford delivered the bonus-point try on 45 minutes.

A relieved Farrell stroked an excellent conversion from out wide, and added a penalty, pushing England 25-3 clear on 54 minutes.

The rest of the match was a scrappy affair, with rare moments of quality.

With seven minutes left, England’s Jack Nowell bounced off numerous tacklers to score in the corner.

Then, with seconds left, replacement hooker Luke Cowan-Dickie scored off the back of a rolling maul, with yet another scuffle breaking out amongst the forwards.

England are guaranteed to finish top of the group, with just France to play next Saturday (October 12), while Argentina play the United States on Wednesday (October 9).

Japan’s dream World Cup run in Pool A continued thanks to a third consecutive victory, over Samoa 38-19 at Toyota Stadium.

The first half was a tight affair, although Japanese winger Lomano Lemeki was a constant threat.

The hosts went out to a 6-0 lead thanks to Yu Tamura’s penalty double, but Henry Taefu struck back with two three-pointers of his own.

When Tamura restored Japan’s lead with his boot, Samoan flanker TJ Ioane was yellow-carded for a pointlessly stupid late hit.

The Brave Blossoms took full advantage, as Timothy Lafaele crossed the tryline following brilliant work by Kotaro Matsushima, putting them 16-9 up at halftime.

But Samoa were far from beaten, and Taefu reduced the deficit to four points early in the second half with a penalty.

However, a wonderful, set-piece rolling maul off the back of a lineout saw No 8 Kazuki Himeno score, moving Japan 26-12 ahead with Tamura’s conversion.

When Taefu added to his personal points tally with a try and conversion in the 73rd minute, we looked set for a nervy finish, but the Japanese hit back straight away.

Kenki Fukuoka, who scored the crucial try against Ireland, sent the home crowd into raptures again with a right-wing sprint.

However, perhaps the most crucial score of the night came from Kotaro Matsushima in injury time, gifting Japan the bonus point.

Pool A is now set up for one of the matches of the tournament so far, with a winner-take-all affair between Japan and Scotland next Sunday (October 13).

In Pool D, Australia got back to winning ways after their 29-25 loss to Wales last Sunday (September 29), defeating Uruguay 45-10 at Oita Stadium, Oita Prefecture.

As expected, Michael Cheika’s men were way too strong for the South Americans, running in seven tries, but the performance still lacked cohesion with way too many handling errors.

Dane Haylett-Petty settled early nerves with a try in the fifth minute, while Jordan Petaia scored on debut 18 minutes later.

It then became the Tevita Kuridrani show, as the world-class runner crossed on the half-hour, helping Australia to a 19-3 halftime advantage, despite Uruguay having seen plenty of ball.

Kuridrani delivered a wonderful solo effort on 46 minutes, with veteran Will Genia giving Australia plenty of breathing space, thanks to a trademark close-range finish.

Wild celebrations were sparked when James Slipper crossed for his first try in 94 appearances. and Haylett-Petty completed a double with a smart finish.

However, Uruguay had the last word in the 78th minute, thanks to Manuel Diana.

Australia are virtually through to the quarter-finals with just minnows Georgia to come next Friday (October 11) - England are their likely opponents in the last eight.