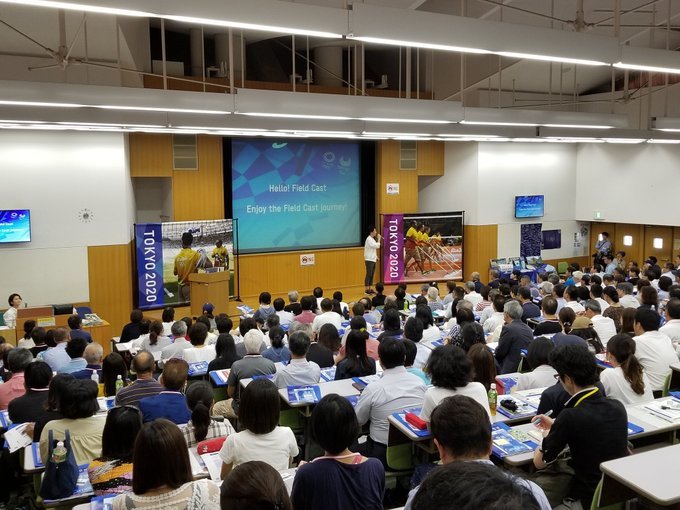 Organisers say the sessions were general training for volunteers, who will be known as the "Field Cast".

The first sessions are taking place at the Tokyo 1964 legacy venue, but the training programme will branch out nationwide in the coming weeks and months.

Around 300 general training events will take place at 13 venues in 11 prefectures in the host nation by the end of February.

The content of the sessions will be the same, starting with an introduction from the participants and a lecture on what they should expect as a member of the Field Cast.

They will be provided with an overview of the Tokyo 2020 Olympic and Paralympic Games, as well as receiving a history.

Training on diversity and inclusion will also be included, along with the rules and rewards of volunteering.

The sessions conclude with participants writing messages to themselves in 2020.

In total, 80,000 volunteers will support the Games, after being selected from 204,680 applicants.

Organisers say over 10 per cent come from outside Japan, representing approximately 120 countries.

#Tokyo2020 today held the first general training session for the Field Cast volunteers.
One of them told me it was her 1st time to join a volunteer activity. "I’m born & I grew up in Tokyo. I feel this is a special opportunity & I really want to do something for my city" pic.twitter.com/9rAbBGNP2e

"This is my first time to join a volunteer activity," said Kana, who was among the participants in the first training session.

"I'm born in Tokyo, I grew up in Tokyo, so I feel this is a special opportunity for me and I really want to do something for Tokyo.

"I lived overseas for a few years, I like to speak English and communicating with people so I hope I can help spectators and athletes."

Tokyo 2020 say volunteers will have a once-in-a-lifetime opportunity to provide valuable support for the operation of the Games.

They will also be deployed in various locations, including competition venues and the Athletes' Village.

The Field Cast volunteers will be given their specific Games-time roles in March.

Specific training for the positions will begin the following month.

Along with the Field Cast, city volunteers will also support the Games and have been given the name "City Cast".