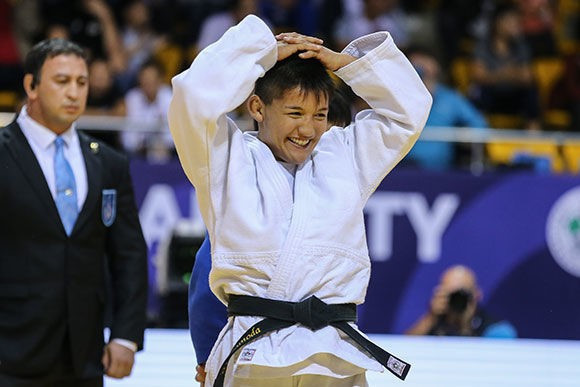 Japan have finished the individual competition at the World Cadet Judo Championships on the top of the medal table with four golds, despite missing out on the final day of competition.

The only Japanese finalist on day four at the Baluan Sholak Sports Palace in Almaty was Moka Kuwagata, beaten by Spain's Ai Tsunoda in the women's under-70 kilograms competition.

The European champion won the first Spanish medal in Kazakhstan as she breezed through the competition, winning all her matches by ippon including world number one Yael Van Heemst of The Netherlands in the semi-finals.

After a tough final, Tsunoda threw Kuwagata for ippon via an o-goshi with 43 seconds to go.

"I made lots of mistakes at the beginning," Tsunoda said.

"I should have attacked from the start.

"But I did not want to reach the golden score, so I decided to place my move just before”.

Bronze medals went to Elisabeth Pflugbeil, Germany's first medal of these Championships, while Van Heemst also made up for her semi-final disappointment with a third place finish.

There was also disappointment for host nation Kazakhstan as they missed out on a final individual gold, Madina Paragulgova beaten by Anna Santos of Brazil in the women's over-70kg.

Paragulgova reached the final by beating France's Liz Ngelebeya in the very last second of their bout, however, could not overcome the world number one, despite scoring an early waza-iri.

Just 10 seconds after falling behind, Santos threw her foe for ippon to stun the crowd and earn the gold medal.

In a battle of contrasting styles, the open and attacking judo of Liveze won the day against the more defensive mindset of Guseinov, claiming an ippon 30 seconds before the end of regulation time.

Todaka Junnosuke won bronze for Japan, as did Roy Sivan for Israel's first medal of the Championships.

The last final of the individual events, the men's over-90kg, was an all-Georgia encounter as Irakli Demetrashvili beat compatriot Giga Tatiashvili via waza-iri.

Nodal Onoprienko from Russia took bronze, as did Sugawara Mitsuki from Japan for his country's 11th medal of the event.

The final day of competition is due to place tomorrow with the mixed team competition.