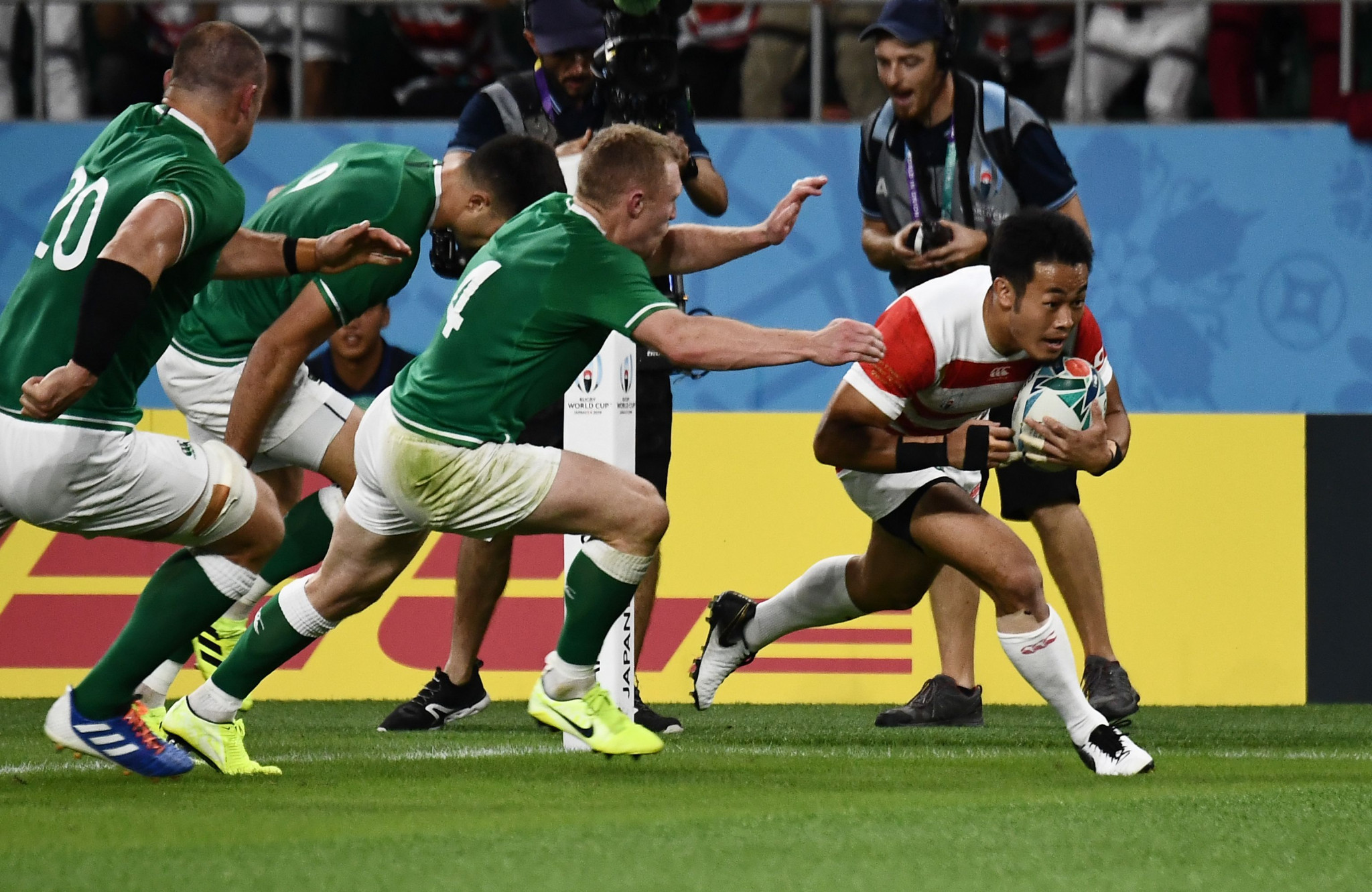 This was the shock Pool A scoreline that set the Rugby World Cup alight – Japan 19-12 Ireland.

The tournament had already enjoyed a wonderful first week of action, colour and crowd participation, but this result has truly lit the touch-paper.

Four years ago, the "Brave Blossoms" pulled off the biggest surprise in World Cup history by beating South Africa 34-32 in Brighton, and while this was not quite on the same scale, it is a terrible blow for an Irish team ranked second in the world.

Ireland just could not exert their power forward game at Shizuoka Stadium Ecopa, while in the backs, the loss of fly-half Johnny Sexton to injury cannot be underestimated.

A cross-field kick landed perfectly for a Garry Ringrose five-pointer, and a regathered chip led to Rob Kearney crossing in the corner.

But three Japan penalties kept them in the hunt, just 12-9 behind at halftime.

The second-half was end-to-end, as Japan defended stoutly and attacked with ball in hand, keeping the Irish pack on the move.

Then, on the hour mark, Japan scored their only try - Kenki Fukuoka going over in the corner, with Yu Tamura landing the crucial conversion.

Ireland had their opportunities, but made handling errors at key stages and their performance was summed up by two moments.

Keith Earls threw a wild pass on halfway in the 78th minute, allowing Fukuoka to sprint down the pitch and relieve the pressure, before Joey Carberry kicked the ball straight into touch in injury time when Ireland needed to retain possession.

"I felt we played well in the first quarter, then stopped playing to a certain degree," Ireland coach Joe Schmidt said.

"Congratulations to Japan, what a furious intense effort it was.

"We're incredibly disappointed we didn't manage to control the end of the game, but they're [Japan] a tremendous side."

Ireland still earn a bonus point for the small margin of defeat, but will now hope that Scotland can do them a favour and beat Japan.

However, the pool is now wide open with Japan having to play Samoa next Saturday (October 5) and the all-important final pool match with Scotland on October 13.

The other two matches today went to script, as Argentina bounced back from their heartbreaking Pool C 23-21 defeat to France, with a solid first-half performance helping them to a 28-12 victory over Tonga.

The South Americans are already in must-win territory and were hot favourites against Tonga, who gave everything in their 35-3 loss to England.

A training ground lineout routine gave him his first try of the game, while the forwards helped him to a remarkable hat-trick of scores.

It's 20 years since a hooker scored a World Cup hat-trick, with Montoya following in the footsteps of Irish legend Keith Wood.

The game was all over as a contest after half-an-hour, as Argentina pulled away to a 28-0 advantage.

While Tonga came back in the second half to give the score some respectability, their opponents may have had one eye on their huge clash with England next Saturday.

Pool B action continued at City of Toyota Stadium, where it was simply a case of how many South Africa would score against lowly Namibia.

Coach Rassie Erasmus made 13 changes to the side that lost 23-13 to New Zealand last Saturday (September 21), with fringe players looking to stake their claim for the rest of the tournament.

Five tries in the first half, including a double for Mbongeni Mbonambi, gave them a 31-3 lead at the break, with a yellow card hardly helping a desperate Namibia.

By the final whistle South Africa had scored nine tries to secure a 57-3 win, the ideal preparation for the match-up with Italy next Friday (October 4).

Unfortunately for Namibia their next opponents are New Zealand, on October 6.