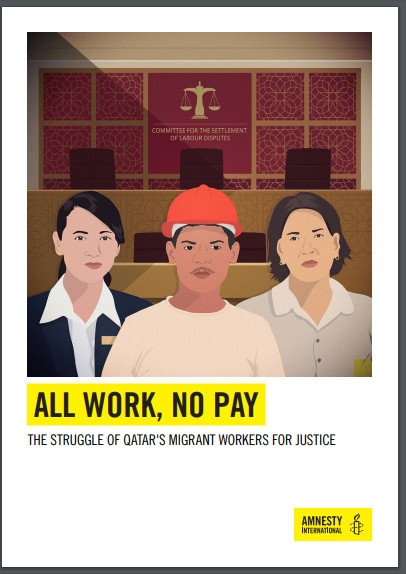 International Association of Athletics Federations (IAAF) President Sebastian Coe has claimed that workers rights in Qatar are being boosted by events like the World Championships and FIFA World Cup being staged in the country.

Amnesty International have published a new report which alleged that migrant workers employed on helping rebuild the Khalifa International Stadium, the centrepiece of the IAAF World Championships due to open here later today, are continuing to be abused and exploited.

In the 52-page report - "All work, no pay: The struggle of Qatar’s migrant workers for justice" - Amnesty claim several hundred migrant workers employed by just three construction and cleaning companies in Qatar were forced to return to their home countries penniless because of serious failings in recently-introduced dispute settlement schemes.

"Sport is a really good opportunity to showcase and to challenge some of those issues," Coe said.

"I do encourage those organisations [such as Amnesty International] to work closely with sport - we can actually be quite a powerful alliance.

"No society is poorer for having sport enshrined in it.

"We’ve seen time and time again in the history of sport and particularly athletics that it doesn’t just sit there mirroring trends, it actually sets trends.

"Time and time again, athletics itself has changed all sorts of conventions and has often been at the infancy of change.

"So I’m really happy to be here and I’m very happy that the sport can be used in that way."

Allan Hogarth, head of policy and Government affairs at Amnesty International UK, claimed they did not want to stop events taking place in the oil and gas-rich Middle East country.

"We’re not against the World Athletics Championship being staged in Doha, but Qatar’s shameful record over the exploitation of migrant workers in the country mustn’t be airbrushed out of the picture either," he said.

"Many of the athletics events will be held in the Khalifa Stadium, built by migrant construction workers who were ruthlessly and systematically exploited.

"It’s true the Qatari Government has announced labour reforms and we’ve welcomed these, but the fact is that migrant workers in Qatar are still largely at the mercy of unscrupulous employers."

Hogarth urged socially-aware athletes competing at the IAAF World Championships to speak out about the problems.

"As with other sporting figures who compete in Qatar, we would call on individual athletes to familiarise themselves with the human rights situation and be prepared to speak out about them," he said.