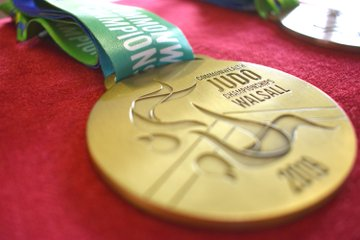 England will host the Commonwealth Judo Championships for the first time since 1986 when the event begins tomorrow.

Over 1,000 athletes are expected to compete at the Walsall Campus of University of Wolverhampton.

"I am sure that the British Judo Association will deliver a great event that will be enjoyed by athletes and spectators alike.

"The British Judo Association has organised a number of high-quality international competitions in recent years and we look forward to a wide range of Commonwealth judo nations taking part and enjoying the experience and hospitality of Walsall."

Organisers say the event will feature a range of categories, including senior and junior events.

👀 Take a look at the medals for this years @officialcja Championships 😍

Who wants to get their hands on one of these in September?

The British Judo Association (BJA) said the event adds to the list of top-level competitions to be held in Britain in the Tokyo 2020 Olympic and Paralympic cycle.

The BJA are holding the event in collaboration with the University of Wolverhampton and Walsall Council.