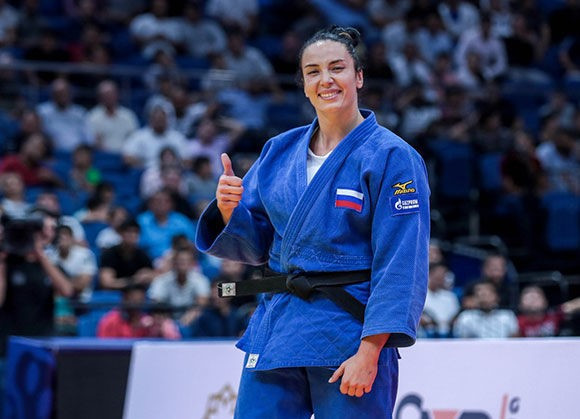 Russia finished top of the medals table at the International Judo Federation (IJF) Grand Prix in Tashkent after two victories on the final day brought their total to five.

The fourth Russian gold was won by Kazbek Zankishiev, who beat Azeri judoka Zelym Kotsoiev in the final of the men's under-100 kilograms category.

The bronze medals both went to Belarus, with Daniel Mukete and Mikita Sviryd defeating Serbia's Bojan Dosen and Viktor Demyanenko of Kazakhstan, respectively.

The final Russian victory went to Kseniia Chibisova, who triumphed in the women's over-78kg division.

It was a quick and brutal triumph for Chibisova, who threw Kim Ha-yun of South Korea for ippon after just 23 seconds.

The final gold in the Uzbek capital went to Georgia's Guram Tushishvili in the men's over-100kg class.

The 2018 World champion, who failed to defend his crown in Tokyo last month with a disappointing fifth place finish, bounced back to beat home hopeful Bekmurod Oltiboev.

Both men recorded waza-iris, before Tushishvili dashed the dreams of the vocal home crowd with an ippon.

There was further disappointment for Uzbekistan as Alisher Yusupov lost his bronze medal bout with Austria's Stephan Hegyi, while Yakiv Khammo of Ukraine also earned a medal by beating Tajikistan's Temur Rakhimov.

Austria capped off a successful IJF Grand Prix, where they finished third on the medals table behind Russia and Uzbekistan, as Bernadette Graf won their second gold medal.

The other gold on Sunday went to Sweden's Marcus Nyman in the men's under-90kg, beating another Russian, Khusen Khalmurzaev.

Both men picked up two shido penalties before it went to golden score, where Nyman emerged victorious.

Baker lost to Nyman in the quarter-finals, but came through the repechage and beat Georgia's Lasha Bekauri for third, while bronze also went to Slovakia's Peter Zilka, who overcame Erlan Sherov of Kyrgyzstan.