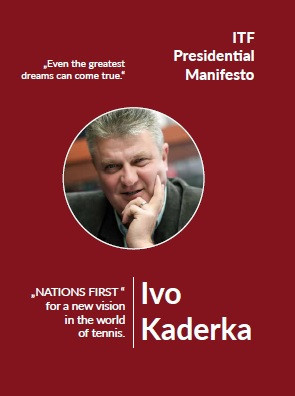 Czech Republic's Ivo Kaderka has targeted improved relations with the professional tours and promised to transform the International Tennis Federation (ITF) into a "flawless, credible and highly-respected organisation" if he is elected President later this week.

Kaderka, a vice-president of Tennis Europe and head of the Czech Tennis Federation (CTS), is one of three challengers to incumbent David Haggerty.

In his manifesto, entitled "nations first - for a new vision in the world of tennis", Kaderka highlights his extensive experience in the sport and the Czech team's success since he took over the CTF in 1998.

He cites unity and "cleaning up" relationships within the worldwide body, as well as with other stakeholders in the sport, among his key aims.

The release of his manifesto, seen by insidethegames, comes less than a week before the vote takes place at the ITF Annual General Meeting in Lisbon on Friday (September 27).

Kaderka is considered the outsider in the field, which includes Haggerty, ITF vice-president Anil Khanna and Ireland's Dave Miley.

The Czech official said he had refused to engage in a "battle" with the other candidates, claiming his "work, history, results and knowledge" is all he needs to campaign on.

"I am not canvassing for votes, what I offer is hard work for all of you," Kaderka writes.

"This is my campaign.

Kaderka, a member of the Fed Cup Committee who also organises the Czech Republic's home ties in the competition, believes there is a growing disconnect between the ITF, the Association of Tennis Professionals (ATP) and the Women's Tennis Association (WTA).

The ATP and the WTA are considered the major players in the sport but Kaderka claims the ITF should fulfill this role.

"The ITF must be once and for all the major and dominant player on the world tennis map," he said.

"There should not be any tension or unfriendliness between the ITF, ATP and WTA.

"The task of the ITF and its leadership is to find a way for versatile cooperation in all areas of world tennis including marketing and trade, because this is the only way in which to stabilise the long-term funding of the national federations.

"And I repeat that no professional tennis, business or commercial success would exist for anybody without the national federations, which produce the players.

"It is necessary to reach a reasonable agreement with the Grand Slam federations too and arrive at a reasonable compromise.

"Let us not seek enemies on our journey ahead; to the contrary, let's join forces and become strong for all of us to become even stronger."

Kaderka also admits he was "perplexed" by controversial changes passed to the Davis Cup and Fed Cup formats but claimed he "respected" the decisions taken.

He also believes there should be a greater spread of wealth between the richer and poorer member federations and said he would "do everything to transform the ITF into a united, dominant, operable, transparent, flawless, credible and highly-respected organisation".